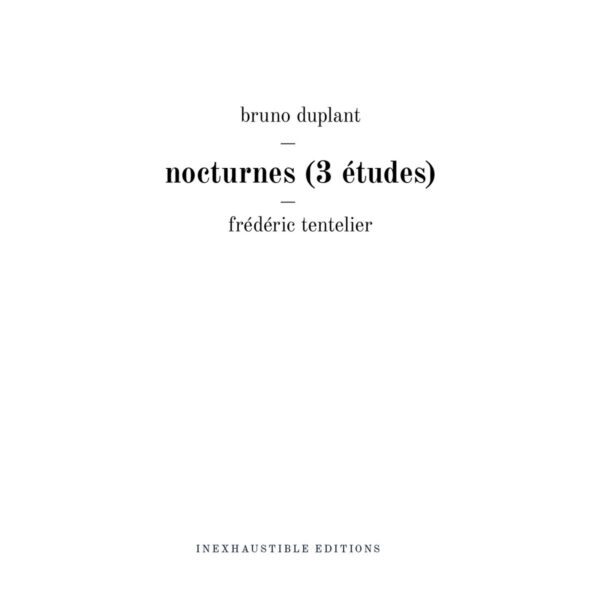 Speaking of Bruno Duplant, here he is again on this label with a new composition called Nocturnes (3 études) (INEXHAUSTIBLE EDITIONS ie-029) which was played on this occasion by Frédéric Tentelier on the Fender Rhodes electric piano. Duplant’s last release for this label was the somewhat perplexing Étendues Silencieuses which we received in 2019. On that item, Taku Sugimoto and Minami Saeki performed barely-audible skeletal tunes in the open air, their ultra-minimal contributions almost swept away on the breeze. Besides trying to engage with the thin content, what was equally bemusing for me was how nobody involved in the project seemed to know what it was about, why they were doing it, or even whether they’d actually done anything by the end. Duplant regarded all of these outcomes as indicators of a great success.

Today’s Nocturnes is only slightly more tangible, but it may simply be because of the way in which certain composers and musicians choose to discuss their work; Duplant seems benign enough, and knows what he’s doing, but he seems to speak in riddles, often quite short and compacted ones. When you compare that approach with the voluminous verbal and written outpourings of Stockhausen, a fellow who was very keen on making himself understood, Duplant’s latterday koans and cryptograms might seem a tad niggardly, but it may also indicate that he regards the content as something that needs to be protected; he composes as one curating rare butterflies or plants, unwilling to subject them to the cruel buffets of wordy descriptions. At any rate, it appears that Nocturnes came about as a very collaborative effort, as Tentelier wanted a piece to play on his piano and commissioned Duplant to do it. The composer is at great pains to stress the egalitarian nature of the working relationship, and without hesitation he dubs Tentelier a co-composer of the finished work. Matter of fact his general tone suggests he wouldn’t want to work any other way than with close friends like this.

Moreover, Duplant took about a year to deliver the goods; not that he was sitting idly, but there appears to have been a very active period of creation and revision at a very detailed level; he almost had to take it all apart once built, in order to reassemble it. If he’d been a watchmaker, you may have had to wait a bit longer for your timepiece, but you could be sure it would run for 25 years with a perfect motion, and probably never need winding either. All of this process has led to the “great coherence” mentioned in the notes, and when you hear the finished work you should experience the welcome phenomenon of two souls becoming as one, so united are they in common aim and intent. Be prepared for slowly-decaying piano chords of unbearable sweetness, suspended in a white sea of contemplative silence or near-silence. There is also much visual poetry in Duplant’s three photographs reproduced here on the panels of the digipak, and the captions too – half Cocteau, half Duchamp, half Man Ray. And the format of the “Nocturne” has a long tradition in classical music too.

As modernists go, Bruno Duplant doesn’t seem especially intent on junking history and alienating everyone who comes within reach, as say Boulez wanted to do (and did). Inside his cool, icy, minimal shell there beats the heart of a romantic. From 28th April 2021.