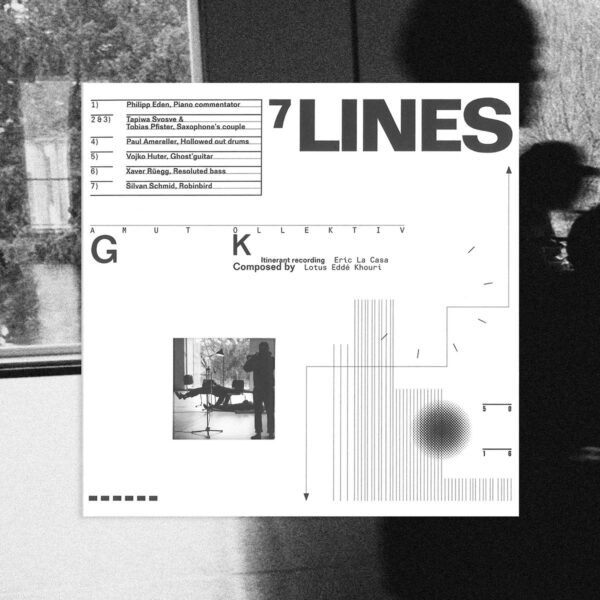 Highly unusual and interesting piece of music is 7 Lines (EDITION GAMUT EG 04), composed by a choreographer for a small combo of musicians and recorded in a very particular way to emphasize the space between them as they stand in the room…the players call themselves Gamut Kollektiv and include Philipp Eden, Tobias Pfister, Paul Amereller, Xaver Ruegg and Vojko Huter, among others, playing acoustic instruments often associated with jazz and free improvisation, i.e. piano, bass, guitar, saxophones, and something called “hollowed out drums” which when combined with the “Ghost’Guitar” make us realise we’re in for a special time.

The composer is Lotus Eddé Khouri, a dancer and choreographer based in Paris, and all of her work concerns itself with space and time, the relationship of sound to movement, and when she was asked by this group of musicians to compose a piece of music for them, she realised there was a unique opportunity…she resolved to “take advantage of freedom”, come up with something that would challenge both herself and the players, take everyone out of their comfort zone…she had in mind to realise a very specific kind of polyphony, and got there by a process whereby each instrument was given a particular role to play, a job to do on the performing stage. At this point she moves into a kind of jargon that I find hard to follow – “preventing the heterophony from sinking into psychology” is certainly not an orthodox way of thinking or talking about music – but it’s certainly paid off in this instance, as it’s brought about a discipline among the seven players, resulting in music that is quite stark, simple, many short phrases, basic repetitions and oddly shaped phrases, yet somehow everything is placed just “so” and each note lands in the right place.

I believe Khouri is keen to stress the “presence” of each person in the room, put them into a space where their every gesture can be magnified. It’s intended as a spectacle for the audience, not just great music for them to listen to. We are afforded a couple of photos on the cover art (and in the press release) which does indeed show the musicians all standing quite some way apart from each other, unlike the “normal” jazz or improv set-up where some form of intimacy and close contact is often regarded as essential to communication and furthering the musical conversation. Besides her interest in fostering this “seven different kinds of logic on stage” scenario, Lotus Eddé Khouri also favours music to be quite slow, and none of these players manages to slip the leash and go off on some frenetic episode of skittery improv, nor blast a heated free-form blurt. Instead, solemn procession and sympathetic exploration are the watchwords here, and it is nice to know that AMM do not have a monopoly on the whole “mutual respect” thing, and that it’s possible to arrive at such intense music by means of pre-ordering and arrangement in this way.

I nearly forgot to mention the crowning glory, and that’s the recording of the show made by Eric La Casa. This Parisian sound artist has created his own remarkable audio statements about space and buildings, many of which have been noted and appreciated in these pages, and who better than he to offer this “itinerant recording” of 7 Lines. This refers to a recording technique that is sensitive to changes in the room, allowing him to “catch the spatial and moving element” of 7 Lines. In short, it is as much a dance piece as it is a piece of music, and the movements change the music; La Casa, in his vivid sound recording here, has done full justice to the performance of these fine musicians and helped to realise the vision of Lotus Eddé Khouri. Excellent. Many thanks to Philipp Eden for sending a copy. From 5th May 2021.