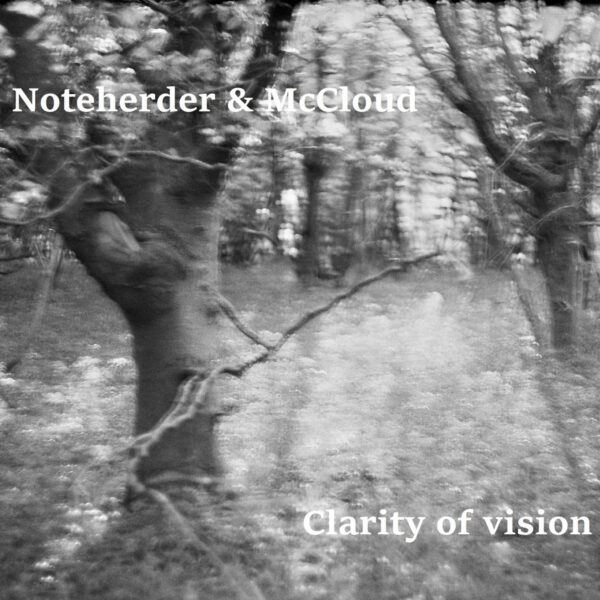 Latest CDR from Noteherder & McCloud is Clarity of Vision (SPIRIT OF GRAVITY)…this duo of Brighton musicians last surfaced around here in 2017 with a crisp, toasty lathe-cut 7-inch item, but with today’s record we’re back to dealing with a full-length album mostly available on the Bandcamp environs though a few CD copies may also have slipped out into the traffic. The duo alias name conceals the identities of Chris Parfitt (soprano sax) and Geoff Cheesemaster (synth and effects), and the album was recorded at various venues in London, Croydon, Worthing and Brighton where our men have been plying their trade presumably over the last few months.

Not only does their form of abstract disaffected noise work best in a live setting, but I like to think they shun the recording studio in favour of dank and greasy dives attended only by small discerning audiences, the better to inject tension and hate into their seething artworks. Yes, what I like about Noteherder & McCloud is the repellent, harsh surface of their music, indicating they’re not out to please anyone or win any new friends, and remain committed to producing their alienating tones in keening, wretched style. (At the Worthing gig, witnesses report that an entire flock of seagulls dropped out of the air, killed instantly by their noise.) Somewhat bleak visions of town and country emerge as they make their oblique explorations, said visions reflected in the track titles such as ‘City break technique’ and ‘Sideways glance at an oncoming dread’. The bleakness extends into occasional use of voice on this occasion, most notably on ‘For a while’ where a desperate intoning pair of tonsils wails its plaint through an echo chamber, alternating with a hideous animal growl. It’s moments like these when Noteherder & McCloud edge a little closer to the “industrial” genre, or perhaps some extreme form of 1980s post punk / cassette band ethos, a move which I find very acceptable. The nasty synth effects have a lot to contribute to this strung-out vibe too.

I mention this as it persuades me it would be a mistake to simply pigeon-hole their music as “free improvisation”, as they are operating in some different plane which they have made their own. Savour these 16 tracks of menace, gloom, and ambiguity as you scope the front cover image, which ironically despite the avowed intent of “clarity of vision” is a blurred, unfocussed vista set in a deserted forest, as if the person doing the seeing were running along breathless in a blind panic. Ogres, vampires, and malevolent trolls can only be one step behind. From 10 May 2021.