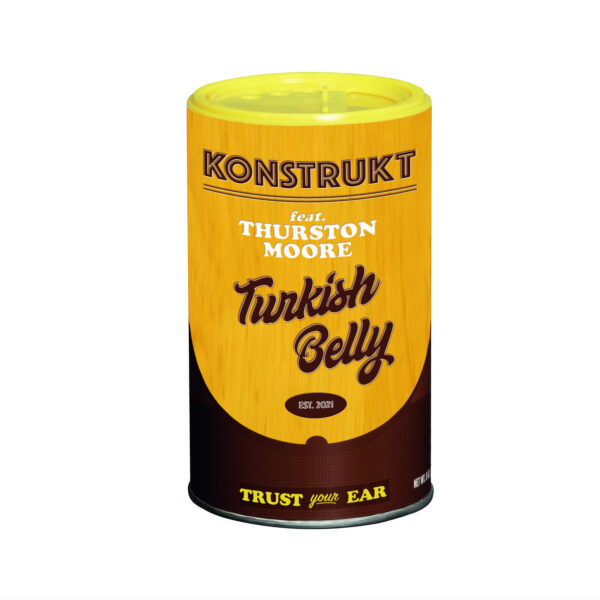 Over the past several years Turkish freeform jazz quartet Konstrukt has been releasing live collaborations with various musicians on the KarlRecords label – previous collaborators include Keiji Haino, Yoshihide Otomo and Ken Vandermark – and “Turkish Belly” is the fifth and most recent collaboration, this time featuring Thurston Moore, best known of course as the former leader of US rockers Sonic Youth. Seeing Moore’s name up in lights with these noisy electronics / jazz improvisers, you might think this live instalment, recorded at the Salon IKSV concert hall in Istanbul in February 2021, should be a cacophonous noise rock / jazz affair, and to some extent that is true when you first start listening to this recording. If you hang about long enough, you’ll find this beast’s belly quite a joyous and melodious work, busy and light on the ear, and not really all that jarring.

Sure, there are tracks like “Sis” (“Fog” in English) which are raucous with blasting sax screams over enthusiastic percussion and electric guitar runs but even in these pieces the music doesn’t seem especially dense and following it is very straightforward. At times you’re waiting for something to happen, the inevitable explosion of barking-mad sax and runaway lead guitar solo, but instead the musicians just power away as if waiting for someone to break away from the pack and lead everyone, musicians and audience alike, on a merry path up hill and down dale. Later on the album, “Zor” (“Hard”) presents a more hard-rocking aspect to the jamming, with a fair amount of gritty noise-lite electronics added into the mix. The closing track “Ugultular” (“They hum”) presents as a sombre droning piece dominated by a squealing, questing sax solo, with the rest of the instruments gradually escalating to a shrill, keening climax. After the sax exhausts itself, the music continues its steady sinuous path into depths dark and misty.

A lot better behaved than what I expected – maybe the production makes the music less brisk, sharp and crackly than it should be – but still a lively work. If you’re expecting “Turkish Belly” to set parties on fire, well, I have to say you need to seek something much more electrifying. I’m not really sure what Moore uniquely brings to this collaboration as his guitar playing, while busy and clear enough on the record, is far more rhythm than lead.