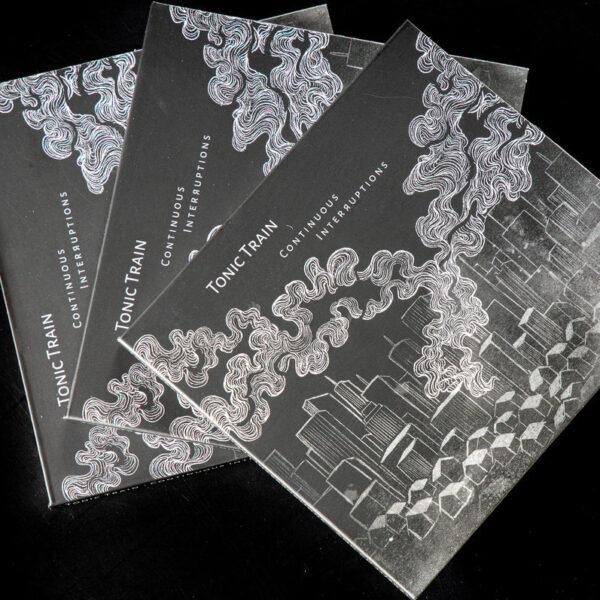 Knut Aufermann and Sarah Washington were both based at Resonance FM for a time, an institution at which I happen to assist, and during that time the station was much more engaged than it is these days in radiophonic experiments and broadcasts under their watchful ears. Since that time both Sarah and Knut have been extremely productive in Europe, curating shows, doing installations, composing and improvising music, besides doing other interesting instances of radio art and finding time to write and teach too.

He and Sarah are here today recording as Tonic Train with a fine set of eight sonic bursts captured on Continuous Interruptions (ANTENNA NON GRATA ANG CD 11/2021). In 2005-2006, the duo went on a year-long tour of Europe, a productive spell resulting in many radio art engagements and music performances; on this disc are examples from gigs in Berlin, Hamburg, Prague, Copenhagen, Vienna and Halle, everything unedited and presented as it happened. Highly listenable purrs, murmurs and growls are the result, occasionally interrupted by unexpected squeals. If we could summarise the general approach of Tonic Train, it would involve such techniques as controlled radio feedback and signal distortions created through use of “circuit-bent” instruments and the bat detector, an echolocation device once used by Eisuke Yanagisawa on his experiments. The mixing desk also has a part to play in the overall churn of sonic information, and the duo expertly plot their way through an array of non-musical sources and sounds. Wisely, they stick to the discipline of working within the boundaries of their simple set-up, refusing any inclination to include outside materials of any sort (e.g. the dreaded “field recordings” that are so commonplace these days). This includes resisting the temptation to bring in short-wave radio broadcasts, another indicator of their focussed approach, and a development which I welcome – we’ve had too many “sound art” records by amateurs who think they’re the first to discover Numbers Stations, or assume that they can inject a “Cold War” vibe by tuning in to speeches from Radio Prague.

Without much fuss or ado, Tonic Train give us the pure uncut real deal in audio terms, and quietly demonstrate their credentials as serious radio artists. Meanwhile their track titles don’t allude to the process, but add suggestive pictorial elements, such as ‘Well Dweller’, ‘Tesla Telephone Exchange’ and ‘SWL Nightlife’, all in keeping with the romance of the airwaves. Diana Lisiecka did the artwork on the cover which visualises this romance, in the form of gaseous clouds floating over a sprawl of cottages and skyscrapers in the night air. Lovely release, recommended; arrived from Poland 18 May 2021.