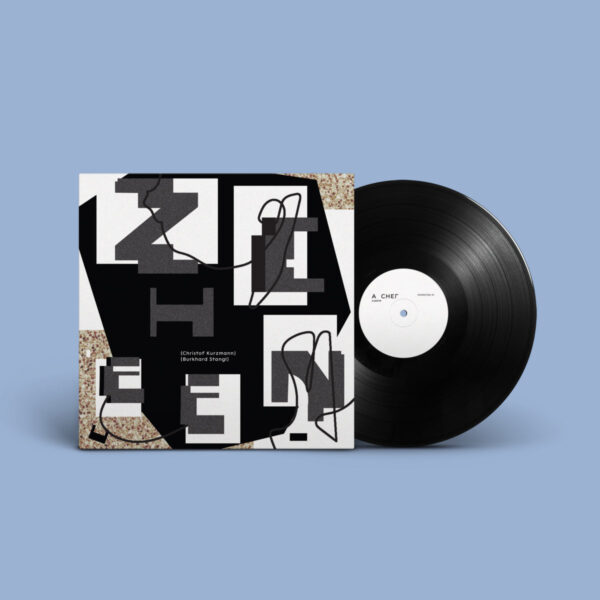 The Schnee thing has been around for about 20 years now ever since our European hardliners Burkhard Stangl and Christof Kurzmann first made a record of that title for Erstwhile Records, but they appeared on the Amplify 2002 box set 3 years later and now apparently make their first LP under that name. At least I think so, as you have to admit that the cover typography is pretty hard to decode – the post-modern opposite of Reid Miles (model of clarity and legibility). Stangl plays guitars and tapes while Kurzmann works the digital malarkey with his lloopp software, beside providing his unique vocal stylings at certain times, and plucking his amplified rubber bands. On the LP Chel (MIKROTON 94) we have a clutch of 2018 recordings, all recorded at the Mikroton Mikroten [festival] in Kalingrad, with the final cut of the album mixing up soundcheck recordings with actual concert recordings, as recorded by label owner Kurt Liedwart and fellow technician Mikhail Myasoedov.

You have to admit this duo really grapple with the nettle of performed music on their own terms, even advancing their turf at key points quite outside the normal realms expected within electro-acoustic improvisation. For one thing, they’re so minimal, forsaking the comforts of a continual fizzy drone for something odd, ill-fitting, where the contours are not exactly clear, and the forward-movement is halting and rickety. For another, the instruments often emerge quite heavily disguised, particularly the denatured guitar, yet the patient listener can still discern the ghostly outlines of a guitar player somewhere in this futuristic violet-toned mist. The interaction between computer and guitar may, in fact, be more profound than I realise; they’re been crafting this method for some time now and although the results may appear subtle and even-handed, it’s likely there’s a strong framework of discipline and hard effort keeping these constrained emotions in check, letting feelings emerge from strange back alleys and seeping from pores we never knew we had.

We’re also informed that the Schnee project, all along, has been propelled by ideas not far apart from avant-garde painting and cinema; “concerned with the actual sensory non-cerebral experience” and “the relationship between colour, image and sound”, and that it’s not inappropriate to visualise an imaginary movie in your mind as you listen. Plus there’s the vocals, notable for their peculiar efforts to keep in touch with the world through layered references (including literary references), and besting Scott Walker for their impenetrable obstinate mysticism. Although I personally find Kurzmann’s wispy half-sung half-spoken vocalisings somewhat tuneless and deathly, I accept that the delivery is probably part of the package, and the tentative way he sketches in his provisional half-statements where he can, finding unexpected gaps in the fabric of the music, is something to be admired. Heck, even to do quasi-song material in the context of free improvisation is still quite a bold move. My reference point for saying this is when I spoke to Eugene Chadbourne in 1989; he told me he very much admired Derek Bailey and the Incus label all-stars, but he added “when I started playing country and western songs, they were horrified.” American player Chadbourne, a musically omnivorous and eccentric maverick, isn’t exactly cut from the same cloth as these two cerebral Europeans who carefully weigh their every move (the Greensboro player would prefer to jump right in with both feet), but you get the idea; Burkhard Stangl and Christof Kurzmann are serious innovators, and genuine experimenters.