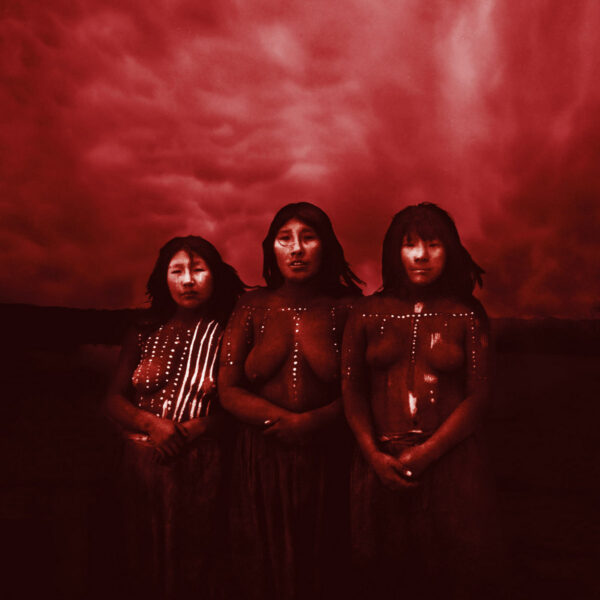 Originally formed as a solo project by Argentine musician Zupai Ulen back in 2012, Ysyry Mollvün really started developing its concept of championing the history and traditions of the Selk’nam people, the original inhabitants of  Tierra del Fuego in sub-Antarctic Argentina, when Ulen met Antonio Sanna in late 2015 and Sanna offered his services as producer. Sanna himself eventually joined the project, playing mainly acoustic guitars and folk instruments such as the charango (a type of lute) while Ulen concentrtes on all other essential BM instruments (guitars, drums, bass) and vocals. The duo released their self-titled debut in February 2022, a concept album based around a story of anti-hero K’aux, trained by the Selk’nam gods in knowledge and skills to pass onto the Selk’nam to help them survive in their harsh environment at the edge of the world. K’aux refused and was punished by being buried in a state neither dead nor alive at the centre of the earth. One thousand years later K’aux is revived by one of the Selk’nam gods to see a world ruled by San la Muerte, the god of death: everywhere there is desolation, the fauna and flora have gone, and humanity itself is no more. What is implied seems clear: with his knowledge, K’aux can restore the earth to what it was before he was punished or he can choose to go back into deathless limbo.

The duo have a very confident and technically accomplished style of black metal, very much guitar-driven and speedy. Riffs tend to be rapid and fast-flowing, and not particularly distinct. The drum-kit is the stand-out instrument in the varied ways Ulen plays the snare and the tom-toms that are often out of kilter with the actual music on most tracks – it’s as if the guitars and percussion have swapped roles and the guitars are concentrating on laying down the essential elements and the pace of the songs while the drums go off on flights of fantasy. The drums don’t even sound all that hard, they appear even quite soft at times. Perhaps surprisingly, given Ysyry Mollvün’s concept and the theme behind the album, the music throughout is mostly efficient if not very original straightforward black metal with a dark, doomy feel. There are not many folk-like elements in the music apart from one track dominated by ghostly flute and acoustic instruments late in the album and brief passages of acoustic music in a couple of others. Ulen’s raspy, ranting singing competes for attention with the guitars and drumming and loses out to both – a pity in a way because the songs are structured around the lyrics and the story they tell.

The album improves with track 4 “K’aux Lament” with much stronger riffing and some background keyboard wash adding a cold touch. The last two tracks are paired pieces which feature some experimentation with guitar and keyboard effects that give them atmospheric depth and a real sense of malice. Something like a real drama, not just a song going full tilt, with vocals, guitars and other instruments all facing off against one another is present in “San la Muerte I”. “San la Muerte II” is the most experimental track with acoustic instruments and a galloping rhythm going head-to-head with whispered vocals and droning fast-picked tremolo guitars.

In general the album is solid 1990s-inspired black metal, sticking close to its inspirations initially and then finding its own distinct voice and sound, cold and raw, in its second half. Songs are well written, performed and recorded with care, energy and passion. On future recordings, Ysyry Mollvün’s voice may be more original, stronger and perhaps colder and more ferocious than on this debut. Perhaps this slow development of Ysyry Mollvün’s style mirrors the slow comeback of the Selk’nam people themselves: after suffering near-extermination from European encroachment and theft of their lands, forced relocations, disease, the break-up of their families with children taken away by government authorities, and the wipe-out of their culture, the Selk’nam, small in numbers though they are, are rediscovering and reclaiming their heritage and traditions.

The real surprise about Ysyry Mollvün – the band’s name is an amalgam of the Guarani and Selk’nam words for “river” and “blood” respectively – is that Sanna is in his mid-20s, yet already is a veteran (albeit working mostly on solo projects) in folk-influenced black metal.