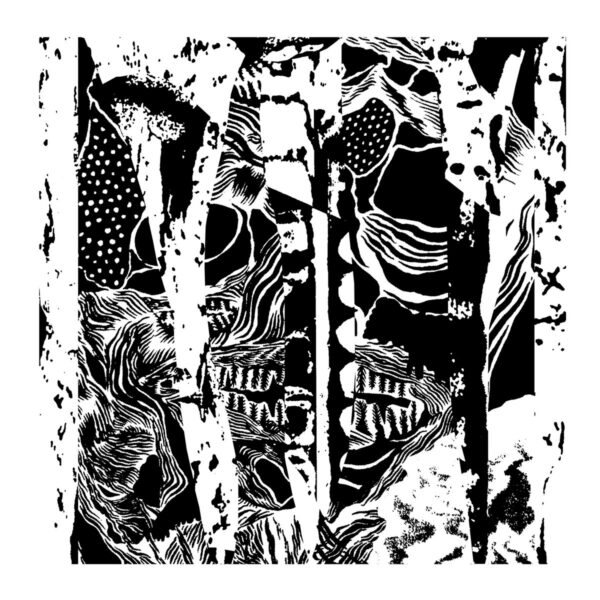 Newcomer Nocturnal Hiss has made Degrader (ACRS 1016), described aptly as a mash-up between Techno and Noise…he also likes violence and video games, with track titles that reflect adolescent interest in science fiction and alien death rays, plus he did the cover art which looks like a cut-up drawing of a skull. So far I’d be happy to file this alongside CDR (Hikaru Tsunematsu), a like-minded lover of fast-moving noise spliced with chiptune, or perhaps Venta Protesix (without the pornography), but Nocturnal Hiss doesn’t quite have the staying power to deliver something truly obnoxious. His beats supply a modicum of energy, but underneath all the fizz and distortion they’re very ordinary rhythms, often running on auto-pilot. More successful when he moves away from the alien disco grid and just plays around with formless noise bursts and wayward explosions, thus edging closer to the desired chaotic states.

Turkish electronicist Melih Sarigöl heard by us in 2020 on his Birkac Parsek record made as one half of FezayaFirar. He’s now gone solo under the name f:rar to bring us his Magara (ACU 1030) album. He currently lives in Berlin and used the 2020 lockdown period as an opportunity to create a “virtual tour” of the city, capturing field recordings and then patiently remixing the sources in his lair, adding improvised passages on his modular synth. Not especially novel technique there, but Magara manages to convey a nice degree of paranoia and claustrophobia in its semi-chaotic grooves and tones, in places suggesting an environment that is out of control and somewhat threatening. The Turkish word magara translates as “cave”, and he adheres to this metaphor by suggesting that us urban dwelling types are all living in caves, nursing an ancient primordial fear of what lies outside. The cover drawing also conveys this, suggesting a pedestrian emerging from an underground walkway to encounter an unfriendly concrete facade. A slight improvement on the rather pedestrian FezayaFirar record.

WaSm is a duo of two Dutch experimenters of long standing, Frans de Waard and Jos Smolders, old friends for the last thirty years and both making considerable impact in the culture. Twee (= Number Two) (ACU 1030) is their follow-up release to Een (= Number One) which came out on Silken Tofu in 2016. Seven quite lengthy tracks recorded in a studio in 2019, which in duration, detail and construction make the above two releases seem a little sketchy, energetic though they may be. We’re given some hints as to the methods they used to make Twee, but as usual I lack the technological brain cells to apprehend the full meaning of their activity. I think it’s to do with treated recordings (of objects, of musical instruments, of environments), but the keywords I’m reading are terms associated with making fine art sculptures – “casting”, “chiseled”, “spatialisation”, “shapes”, “tactile”, “rough and smooth”. All these descriptive texts are highly fitting for the well-crafted and carefully-arranged sounds we hear, which do indeed succeed in creating the sense of a space around us, a virtual art gallery filled with fascinating shapes, some of them so well-rendered as to be almost tangible. Given Smolders’ background in studying architecture, this spatial dimension has a certain extra poignancy in the work. A fine set from two accomplished masters of sound manipulation.