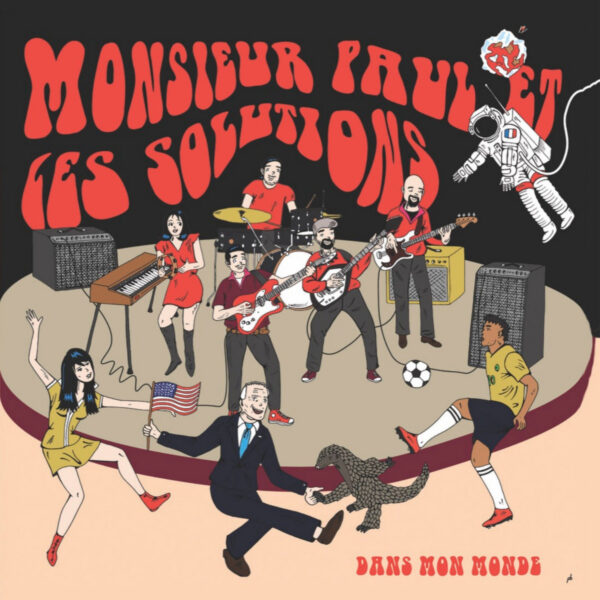 I must confess, it was the lively front cover artwork that caught my attention at first – and then the music was quite a surprise too! Monsieur Paul et les Solutions are a quintet of hipsters journeying back in time to the colourful world of 1960s French pop / garage / surf / yéyé music. Four short and joyful songs with bouncy dance rhythms, poppy tunes, loudly barked lyrics (in French) and sprightly lead guitar solos are on offer on this limited edition 7″ vinyl release. Title track “Dans mon monde” borrows quite liberally from British and American pop and rock music of the mid-1960s with a Beatlesque chorus, a brief guitar-dominated instrumental and rousing riffs and rhythms. “Plagier Dutronc”, referencing 1960s French rock icon Jacques Dutronc, has a more mid-’60s sound verging on psychedelia with ringing guitar strum and a lead guitar solo that could have come straight out of the surf rock / pop scene. Closing track “Waiting for True Love” is the only song in English and verges on the rave-up rock music reminiscent of mid to late 1960s Yardbirds even though the song namechecks Brian Jones.

My French being so rusty, I don’t have a clue what the band is singing about but the lyrics seem very  snappy and light-hearted. Nor can I figure out how US President Joe Biden ended up on the front cover of the album dancing with a pangolin while ’60s yéyé icon Françoise Hardy (married to Dutronc in 1981, now separated but still on friendly terms and never divorced) jives alongside and a football player and astronaut try to join in the fun.

For a few brief moments I swear I was transported back into a world hitherto unknown to me, a world of sweet schoolgirl pop singers belting out hits over a soundtrack of jaunty pop / rock that has a surprisingly tough punk edge. What was really shocking to me was that I didn’t want to leave when the record was over!