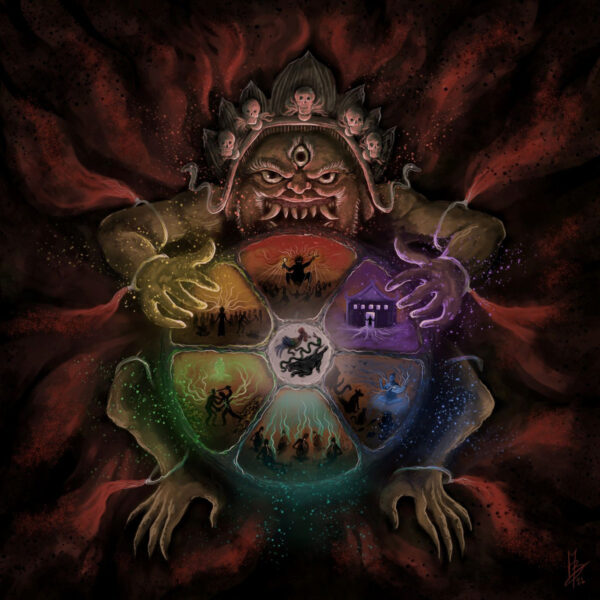 Continuing to explore the role of death and destruction in the soul’s karmic journey, French solo blackened death project Tattva brings out second album “Naraka”, the title of which refers to Hell as a place of tremendous suffering in the cosmology of the Jain religion (a minor though very ancient religion in India). Souls are reborn into Naraka as a result of karma from past lives and stay in Naraka for however it takes for the karma to work its effects, after which souls are then reborn into a higher world according to other past karma. Accordingly “Naraka” is a work of sonic aggression with plenty of torment, anguish and suffering as massive raw-noise tremolo BM guitars carve out sharp, chompy riffs from a dark, oppressive space. Speedy blast-beat drum programming and an unholy choir of rasping BM and deeply guttural DM voices complete Tattva multi-instrumentalist / vocalist J’s minimal set-up: this range of instrumentation throws the emphasis onto J’s ability to come up with melody and hooks to keep listeners fixated on his desolate vision and the harsh, sharp-edged guitar tones.

While the music is dense with a very scourging and massive sound, and the shredding guitars in particular are very sharp and abrasive, it also sounds fairly light and airy. The drumming is hard-hitting but, being low in the mix, not thunderous. As a result the songs are actually easy on the ear, with melodies and riffs clear-cut, and the music and vocals not appearing to fight constantly for attention. In all songs the lyrics are important and they revolve around the soul’s experience of Hell: being judged and sentenced to Hell, death, deconstruction of one’s material body, and the agony of the punishment or justice being meted out as the effects of past evil karma are realised. The music can be very intense and emotional (especially on middle track “The Wheel of Life / Karma” which seems genuinely regretful over past sins at times) but in spite of constant twists and turns, and details like throat singing (in “Hell’s Path / Naraka”), a mystical sighing ghost choir and huge chunky riffs in some tracks, my impression of the music across the album is of songs being similar in style, atmosphere and mood.

Staying in the mould of straight-ahead old school melodic black metal, the album emphasises dense songs packed with hooks and riffs over stuttery triggered blast-beat patterns. Early tracks like “Hell’s Path …” and “Judgement / Manu Shya” are fierce and aggressive but the best track might be the closer “Expiate / Nama Rupa” which features moments of oppressive atmosphere where guitar tone floats amid ferocious riffing and ranting voices. The music has its deranged moments where everything speeds up along with slower, doomier parts and some droning guitar feedback melody looping.

“Naraka” is part of a trilogy begun by Tattva’s first album “Nirjara”, which I actually find more superior in its sound and variety. “Naraka” comes across as a more conventional blackened death metal album than “Nirjara”. (The other recording in the trilogy is an EP, “Avanati”.)