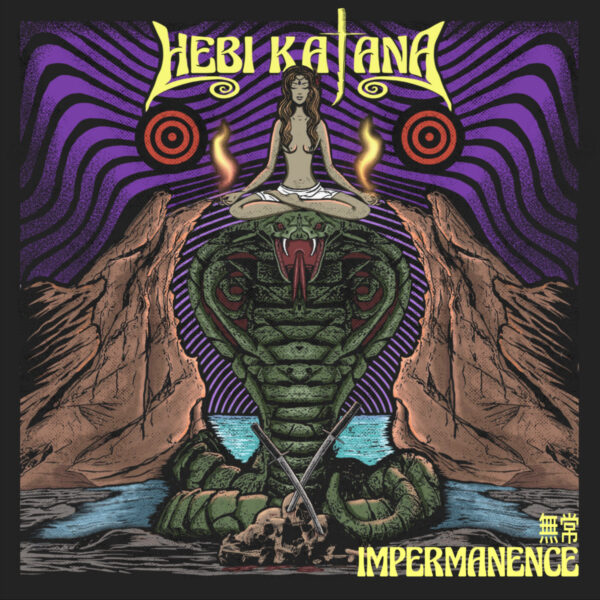 Self-styled “Tokyo Samurai Doom” trio Hebi Katana come roaring back with their second album of retro-1970s bluesy Sabbath-inspired doom metal “Impermanence” after their first self-titled full-length (released in December 2020) attracted attention around the world from Argentina and the US to Italy and Poland. As on their first album, these hebi fellers, wielding guitars and drumsticks rather than actual katana swords, chop out very catchy tunes and meaty riffs on a set of nine songs revolving around themes of inner struggles, evil and drugs. Hebi Katana may not be the most original retro-stoner / doom rockers in business but they love what they do and play with gusto and plenty of feeling.

The music ranges from straight-out steely heavy doom, sometimes with a deep crumbly edge, to hard rock and even pop (“Running in My Vein”), to Sabbath-styled psychedelic-lite (“Take My Pills”). Even sing-along / clap-along folk-rock music, albeit with a thundering drum accompaniment, of the sort Led Zeppelin (early 1970s) occasionally flirted with, makes an entry in closing track “Underneath the Sky”. While I like the earlier songs on the album for their stoner / doom style, the later songs which stray into pop and folk rock territory are pleasant with infectious tunes, and the emotion can be intense. Songs in the middle of the album are solid and muscular with a robust rhythm section, the guitars having a clean blues tone.

The songs are well written and recorded though perhaps the recording style could have been less ’70s-sounding with that muting effect and more 2020s in sound and clarity: audiences these days don’t need to hear retro-’70s recordings sound as if they were made half a century ago when they can find the genuine article on Bandcamp, Youtube and other online music channels. Lead singer / guitarist Nobu stays with a wailing style of singing which is good though not original; the singing does become a bit monotonous in the album’s later half. Fans of Nirvana and Soundgarden as well as Black Sabbath may recognise influences from Kurt Cobain and Chris Cornell in Nobu’s singing.

If you like time-travelling back to the 1970s (and even a little into the 1990s) without the hassle of finding a team of wacky physicists and engineers to build you a machine, perhaps let Hebi Katana take you away on this album – at least what they do, they do it to the letter and nothing more. The trio pin down the sounds of nearly half a century ago precisely but a unique sense of style and flair that could be theirs and theirs alone is lacking.