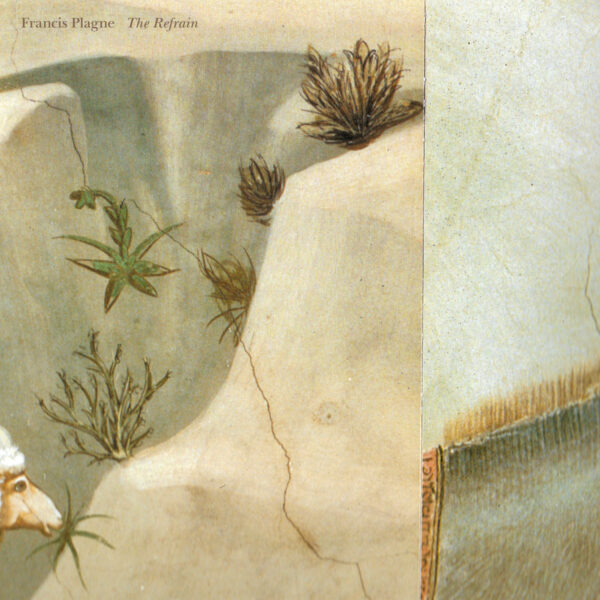 Definitely not what I had expected from Francis Plagne – I’d always thought of him as a troubadour playing experimental improv pop ditties of a seemingly fragile and innocent nature – but here he is with new album “The Refrain”, completed in 2020 using sonic materials recorded accumulated over an eight or nine-year period, materials sourced from such unlikely origins as bubble wrap, plastic bottles, creaking chairs and Canadian musician crys cole (of Ora Clementi, whose work “Sylva Sylvarum” I’ve reviewed elsewhere on TSP) playing a Casio instrument. These materials were then re-amped, processed and edited, with additional instrumental pieces performed on synths, guitar, plastic saxophone, melodica and percussion, and shaped into long instrumental soundscape works of otherworldly shape-shifting mystery.

At first presenting as a quiet, unassuming work of immersive and strange, ever-shifting sound art, “The Refrain” reveals its range and depth – and it turns to be very deep indeed! – in slow droning ambience through which tiny creaky noises, an ongoing wobble drone and various other sounds either flit in or out, or float serenely by. While listeners may wonder why such a long sprawling work has to be cut up in two to fit the limits imposed by a vinyl LP format, I note that over time with repeated play the album will eventually acquire a warmer, perhaps fuzzier patina due to the grooves being worn down so that no two hearings will be the same and the listener’s experience of the recording will change over time. The recording will at once be timeless and transient.

As it progresses, the mood of the recording changes to something ominous, even a little dark and sinister, though the general impression I have of “The Refrain” is one of serene benevolence. Much later in the album there can be a feeling at once wistful yet resigned. There certainly seems to be an air of perhaps fatalistic and passive acceptance, reflection and moving on in the path shaped by past actions and memories.

A well-crafted work of delicacy and mystery, very unearthly to boot, for a brief time (less than 40 minutes) this album gives its audiences a peek into another dimension vast and endless.