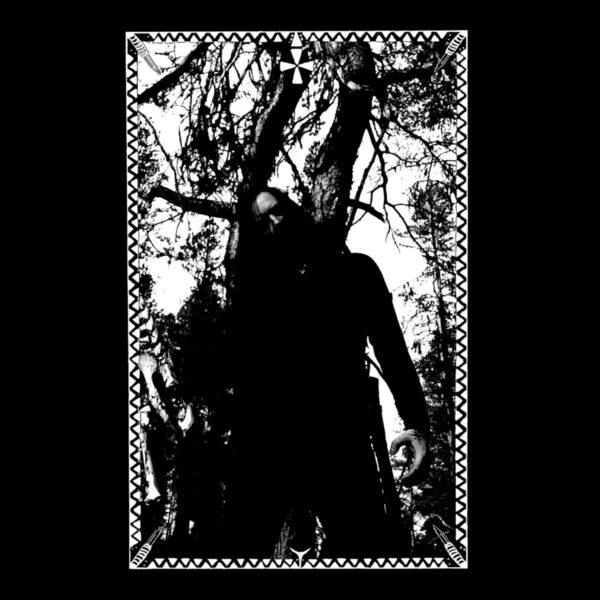 Based in Gällivare in far northern Sweden is raw blackened punk metal act Ruohtta whose sole member Tervaaja composes in a hybrid language of Meänkieli, the collective term for dialects of Finnish spoken in northern Sweden near the Finnish border, and of Sámi, the language of the indigenous people living in Swedish Lapland Formed in 2012, Ruohtta became more active in the last few years, issuing debut album “Gutna” in 2021 and releasing its second album “Sielunsoahti” in early 2022. According to Ruohtta’s Bandcamp page “Sielunsoahti” focuses on a war of souls in Lapland, interpreting emotion and spirituality in the liminal spaces between languages, cultures and mindsets. All the music here was composed and played by Tervaaja who also designed the cover art for the cassette release.

The album has a raw spiky feel though its production is actually very searing and clear, with even the vocals being clear though set far back in the mix and having an oppressive and harsh ghostly quality. The guitars often have a twangy harsh bluesy edge to them which darkens the album’s mood. Percussion is set far back in the mix with a soft sound so the guitars end up being the dominant instruments. Songs are well composed with definite, sometimes even catchy melodies though I doubt Ruohtta, with its interest in black magic, Finno-Ugric mythology, darkness and feeding off negative emotion and feeling, is in the mood to appeal to a commercial metal audience. Nevertheless tracks like “III” and “IV” – of the nine tracks on offer, only the first and the last have actual titles, the rest are numbered – have clear riffs that verge on rock’n’roll and which help to reinforce a gloomy urban blues melancholy that later threatens to become seriously unhinged and deranged. The snarling ghost vocals have a deathly quality yet also appear pained and world-weary.

For music limited in its range of instruments to guitar, percussion and voice, with songs depending on repeating riffs, “Sielunsoahti” works well as a set of very melodic songs with their own identities, moods and dark atmosphere. The harsh, sometimes whining guitar and the equally grating vocals match well though the music can and does drown out the screams and cries. The lack of bass on all tracks, especially “VIII”, allows the bleak darkness to bleed into the songs and become part of them. A folk-like feel is present in the steady beats and matter-of-fact presentation, with all the drama coming from the seething voices as they shriek behind the guitars. A few tracks like “IV” and the closer “Loahppa” are almost completely instrumental and the repeating riffs dominate these songs with perhaps a second guitar melody, cleaner in tone if quieter, playing along as well.

I see this album as being one for Ruohtta’s fans, one not really likely to pick up new fans even though the music is paced well; listeners can follow it and not feel that at any moment the music will speed off leaving them in the dust. The riffs are varied enough that the album rarely becomes boring in spite of elements in the music and its production that could potentially be monotonous. If Ruohtta can continue refining its style and delving more into the cultures of the Sámi and the Finns in northern Sweden cut off from their brethren farther south in Finland, it may well become quite a significant act with a distinct style and sound.