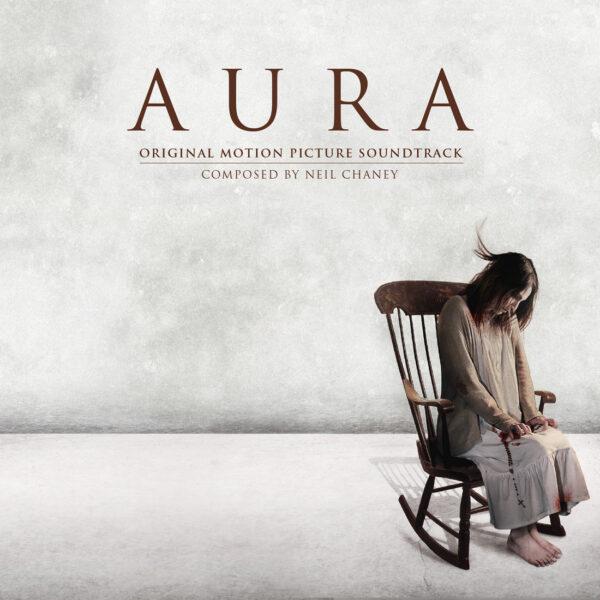 Neil Chaney here with Aura (COLD SPRING RECORDS CSR296CD), a soundtrack album for a recent-ish exorcism movie of this name from 2018.

15 short instrumental cues, but in each short episode of compacted information Chaney exhibits a certain skill with conventional orchestral music (very elegiac and melancholic tunes) as well as the expected “atmospheric” tones, smuggling in as much dark ambient material as the constraints of a British horror film will permit. The orchestral parts might all be played by Chaney himself – I’m unable these days to distinguish a string synthesiser from a full orchestra, and in any case everything here has a lurid patina produced by careful digital tweaking that conveys a thrillingly unsettling mood. Not his first soundtrack album – he’s done a few other shorts and TV shows, plus the 2016 movie Clutch – and Neil Chaney has passed into this line of work from his background in power electronics and industrial music, thus following a similar pathway to the New Zealander Graeme Revell, originally a member of the brutal industrial act SPK and now a well-respected and prolific Hollywood composer. I see Chaney was a member of Satori, though not the original 1980s incarnation – it got revivified in 2006 by Justin Mitchell, who wasn’t even an original member, but the two of them managed to turn it into a successful touring act. Before this Chaney enjoyed a brief career in the early 1990s as Pessary, releasing a few records for Dirter Promotions and tapes on Robert Maycock’s Mindscan label.

As to Aura the movie, which I never saw (though it sounds like it would have appeared on the Horror Channel), it’s kind of unusual that it uses Kirlian photography as a plot point, an element which does surface in Chaney’s cue titles here, but the remaining titles – such as ‘Nightmare’, ‘Asylum Visit’, ‘Demons and Entities’, ‘Blood Vision’ etc. betoken more conventional horror fare. From 24th June 2021.