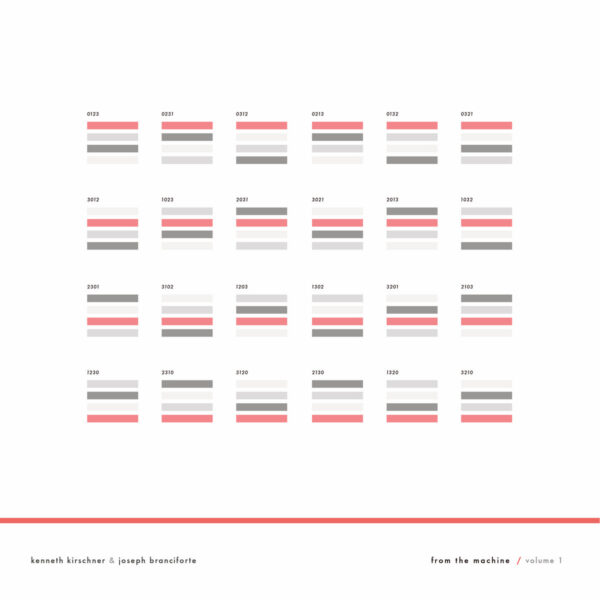 We were sent a copy of From The Machine Volume 1 (GREYFADE 002) by Joseph Branciforte in New York, who describes himself as a musician, composer, and recording engineer. He also happens to own the new record label Greyfade, and this is its second release. The record is credited to himself and fellow composer Kenneth Kirschner, fellow New Yorker and an electronic musician who has appeared regularly on the 12K label (as well as SIRR, Room 40, and Mikroton). The record showcases two new works, both of them making use of computer software to realise the compositions, but what we hear on the grooves is all-acoustic and played by some topnotch string musicians (and one pianist).

On the A side, we have Kirschner’s piece ‘April 20 2015’, played by the trio of Jade Conlee, Mariel Roberts, and Meaghan Burke. I should indicate this began life as a purely electronic piece by Kirschner, composed using tiny fragments of samples of sound (from acoustic music, I gather), from which he patiently wove an entire 21:19 minute piece. Joseph Branciforte proceeded to recast the work into a score, transforming the all-digital work into notated sheet music which musicians could read and play. I would assume this feat alone is a non-trivial task requiring a deal of patience as well as skill, and it reminds me of the impressive results that Reinhold Friedl has managed for the Zeitkratzer Ensemble, where he’s often found a way to notate sounds that you wouldn’t have thought lended themselves to interpretation by a conventional orchestra. Branciforte not only pulled it off, and created a beautiful piece of music too, but – as he emphasises here – he also wanted to remain true to the intention of the original piece, which he saw as embodying a “free, non-metric space”, and he hopes his recasting has resulted in an “expanded sense of structure” of that original. Without knowing the detail of every single minim, any listener can hear what a near-perfect realisation this is, almost crystalline in its idealised forms. I’m reminded in places of Morton Feldman, a comparison which I make far too often, but I’m thinking specifically of the short, repeated patterns and subtly-changing phrases that make up ‘April 20 2015’. From these forms, you can also sense the digital logic of the computers that originally helped to author the work. Far from being a “gimmick”, this has been a very successful stepped process where a lot of care and attention has been expended at every stage. Not least in the performance, we must add; the players exhibit extraordinary skill, and also provide a subdued warmth, proving that this is very far from a mechanical exercise.

Strong as it is, the A side is just slightly eclipsed by the tour de force on the B side, a composition by Joseph Branciforte called ‘0123’ and realised here by the “low string” quartet of Tom Chiu, Wendy Richman, Christopher Gross, and Greg Chudzik. This one is much more “systemsy”, using a score that was 100% composed on a computer. Branciforte provides a detailed explanation of how he got there, and while I don’t understand all of it it seems that it’s based around the organisation of four separate notes, deployed in all their possible permutations; there are also rules governing the structure, which may affect the rhythm, tempo and dynamics. The main point is that all the musical information is derived from this very basic starting point of four, and Branciforte’s generative systems and algorithms do the heavy-lifting of building it into a complex score. Some of the elements of this grid approach can be seen, I assume, on the front cover design with its numbers and varied arrangements of four blocks of colour.

We don’t often hear rules-based system music, and at the moment the main art history precedent I’m thinking of comes from cinema – those experiments of the London Film-Maker’s Co-op which replaced “linear narrative” story-telling with mathematical rules to generate loops, repeats, and edits. For his part, Branciforte is proud of the “inexorable logic” that unfolds across the 19:01 mins of the piece and hopes we too can celebrate the “pure mathematical possibility” of it. However, it doesn’t remain as pure algebra, and once it gets into the hands of these four talented players we can really hear how ‘0123’ comes to life. The instruments, and the players, seem to me to be locked into their task, tightly executing their limited movements to produce lean and spare sounds, with almost zero effort expended on conventional forms of performative expression; for instance, you might normally expect a bit of string vibrato when you get a violin, a viola, a cello and a double bass together in the room, but not here. It’s as if they were kitted out as four Ninjas of music, fully masked, their black bodysuits taped at wrists and ankles so as not to leave a single trace of DNA at the crime scene. Aesthetically, ‘0123’ does not exhibit the benign calming tones of the A side, and in fact it sounds much more ominous, gathering more menacing tendencies as it proceeds. It thickens, as if showing the complexities of its mathematical laws like an underlying grid system; I shan’t say this creates a claustrophobic effect, but there’s a vague closed-off vibe, as though we’re hearing work that’s not setting out to represent anything, other than an example of itself.

The record label Greyfade intends to focus on “process-based works, electronic and acoustic minimalism, alternate tuning systems, and algorithmic composition”. Vinyl only releases, with quality cutting done at Masterdisk, and limited editions – only 200 copies of this one. From 15th June 2021.