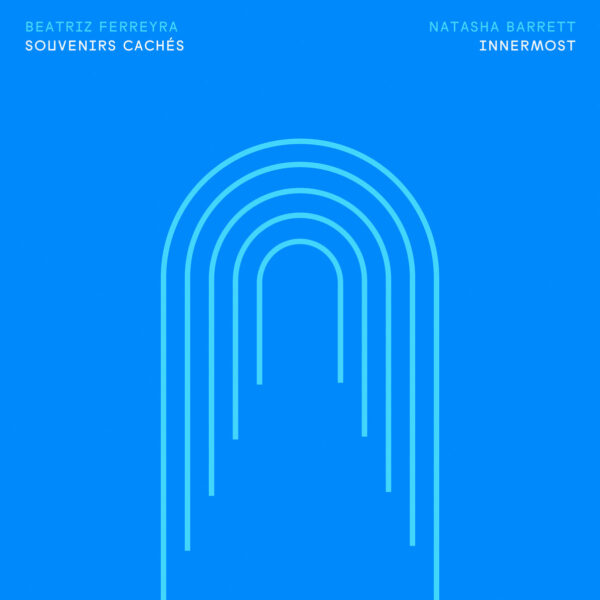 Very happy to receive the latest instalment of music in the Persistence Of Sound programme…we last heard from this UK label dedicated to musique concrète, electroacoustic music and field recordings in 2020 with the LP Huellas Entreveradas by Beatriz Ferreyra. It so happens that Ferreyra also occupies one half of today’s split album Souvenirs Cachés / Innermost (PS005) with Natasha Barrett, the English composer based on Norway, occupying the B side.

Ferreyra’s main offering here is ‘Souvenirs Cachés’, a 2020 composition which features voices and spoken word quite heavily, although the words are all but unintelligible and what emerges is the strange combined sound caused by the fascinating, mesmerising mix of murmuring tongues. Along with these vocal utterances, the flute of Hernan Gomez surfaces from time to time, his breathy exhalations not far apart from the mysterious moanings that surround him. Recordings of percussion are also contributed by himself. The composer intends the work to represent “childhood impressions”…it’s a jumbled-up re-arrangement of memories, and if memory is indeed the key to understanding these “hidden souvenirs”, then memory also turns out to be rather unreliable, shifting under our feet like quicksand, flashing past us in broken images, and only occasionally yielding a glimpse of something remotely recognisable in the general churn of mental processes. This work came about when Ferreyra had some spare time at the start of year 2020 – many concerts cancelled, a fate which befell many other musicians – and she set about curating her private library of recordings, where I presume the source materials for her compositions are safely stashed. It turned into a process of reflection for her, almost one of self-examination, and she made it into art – transforming selected recordings into a conversation, a dialogue with herself. Very successful result; I like the way the work keeps mutating subtly, with no violent shifts of timbre or texture, and refuses linear story-telling in favour of something much more impressionistic and nebulous.

Also on side one is the short ‘Murmureln’ from 2003, a short piece representing her own very idiosyncratic take on Tango music (reminding us of her Argentinean roots). It’s formed of her own vocal impressions of this very rhythmical music style, almost like an eccentric form of beat-boxing, interwoven with samples of recordings of actual tango musicians strumming and whooping. A shade too contrived to me and it’s a bit hard to see how this fits the bill as “danceable” electronic music which is what the art patrons in Berlin were hoping for when they gave her the commission. On the other hand, it is personal to Ferreyra in a meaningful way, as a memory of a family member who used to perform similar vocal expressions of tango, and as a connection to her own country’s indigenous music.

On Innermost, Natasha Barrett dazzles the listener for 18:49 mins with a highly dynamic and exciting piece of contemporary electro-acoustic work, and one I would regard as a thought-through and well-considered compositional work. It began life, I suppose, with field recordings she captured at a couple of outdoor public events in Norway, both involving joyous crowds of people, one of them featuring a marching band. These have served as source material for Innermost, and the sounds have been heavily treated, manipulated, truncated and sliced; at the start of the record, voices emerge – or rather leap – torn out of their original context, barking and hooting incomprehensibly, jumbled and mixed, every utterance cut short or faded. This has the odd effect of making the crowd seem angry or agitated about something, yet the actual events were nothing of the sort – I mention this as political rallies have been a popular source for tape composers, generating repeated chants and yells and other sources of audio richness – or simply emanating an angry, emotional mood which might transfer onto the tape (something Genesis P. Orridge wished to harness on his Psychic TV experiments, I believe).

After the fragmentary opening sections, very reminiscent of Lionel Marchetti, there’s a perceivable “second movement” to Innermost where the sounds grow more lush, less “broken”, and even more abstract. At this point the open-air vibe of the early sections gives way to something more dense and swaddling, and the composer indicates she’s hoping for more “interaction” between the multiple layers she is now piling on, and intends to manifest a certain “spatial counterpoint” in the fabric. At this point it’s worth mentioning that Innermost may or may not be related to a video artwork by Marc Downie, and in its original incarnation was exhibited as an elaborate sound installation with 36 speakers and something called “3D Ambisonics”, both of which techniques I assume can only have heightened the illusions of spatial depth that Barrett is grasping at. To that I would add her masterful use of “sound windows” to allow the effect of show-through, one sound appearing in the window of another as it were, which was a device noticeable on Stockhausen’s pioneering Gesang der Jünglinge. I like the way this piece keeps us hanging, not quite resolving into the shapes we might expect it to, creating a strange tension and shifting its forms in an almost “liquid” manner. In this milieu, the sampled voices of the happy outdoor Norwegians become very odd indeed in short order.

Both sides of this LP might complement each other to some extent; both feature the sounds of human voices quite heavily, and each composer makes use of fragmentary sonic material, carefully arranged to offer us fleeting glimpses of the truth. From 25th March 2021.