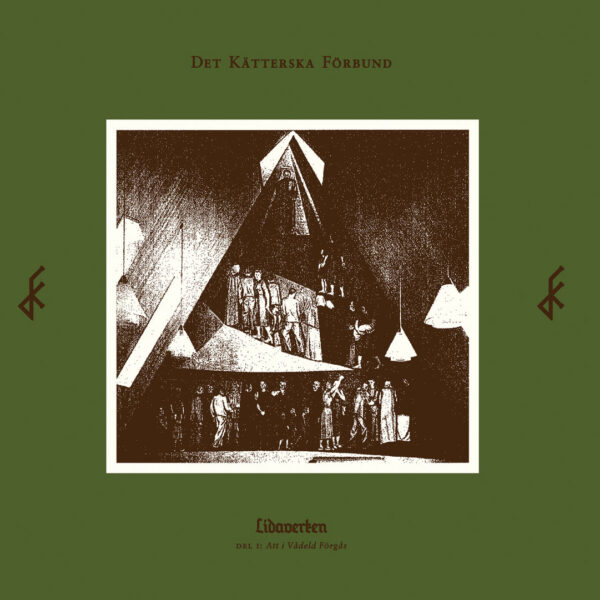 Here’s a grim beast from Sweden in the form of Lidaverken Del I: Att I Vadeld Forgas (COLD SPRING RECORDS CSR265), produced by the team-up of two grisly musicians, Henrik Nordvargr Björkk and Thomas Ekelund. Nordvargr will be known to some as key member of Mz.412, whose remorseless records we noted around the time of a reissue programme in 2011, and more recently there was the hideous album Svartmyrkr from 2019 which did very little for this listener.

Besides being brutal, Mz.412 delighted in a particularly extreme form of blaspheming and anti-religious screeds, resulting in bleak records that were almost 100% anti-humanity. But thankfully, there’s less of that mean streak in evidence on today’s record, and although there’s plenty of painful bludgeoning and deathly themes, the duo also manage a good menacing atmospheric mood on some tracks, for instance the title cut and also ‘Bar as Broderlos Rygg’. This atmospheric dimension I attribute to the contributions of Ekelund, appearing here under a runic name my keyboard cannot reproduce, and familiar to us from past works as Dead Letters Spell Out Dead Words and Trepaneringsritualen. I have a soft spot for both of those acts of his, even though the latter is extremely blackened and grim, and the former is utterly bleak and suicidal. As Dead Letters, Ekelund has made artistic capital out of his own mental illness, freely owning that he has suffered from borderline personality disorder, resulting in depression and a terrible disconnect from the rest of the human race. For that, he elicits my sympathy; conversely, Nordvargr just seems to be hateful and misanthropic for the sake of it, and as yet I’ve found no evidence to the contrary.

As to Lidaverken Del I, it emerges as surprisingly listenable compared to the toxic blasts of Mz.412, and contains certain hooks that make it shade more accessible – vocals (called “incantations” here by the press note), strong rhythms, pounding beats, compelling mesmerising drone-based riffs…but make no mistake, it’s still firmly in the “Death Industrial” mode, spitting out many poisonous barbs, unpleasant textures, and insufferable noise, challenging you to endure this sheer aural Hell. The press persuades us that this record “adds new elements to the otherwise rigid tropes of the genre”, an assertion which might be true, but I’d have to let other experts determine that. Available in CD and as a limited LP pressed in black or olive green vinyl. From 24th June 2021.