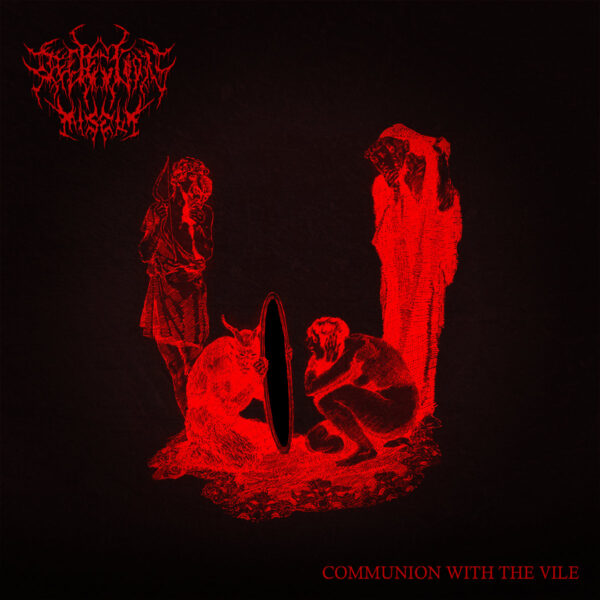 Even after hearing this EP a few times, I’m finding it hard to believe that it was produced by a band that has only existed since 2020 and still consists of just two musicians, one of whom plays all instruments while the other concentrates on vocals, ambience and the artwork for the project’s releases. “Communion with the Vile”, the second release from Nicaraguan blackened death / ambient metal duo Reflection of Misery is a truly dark and demonic affair, very layered yet with an airy feel that allows the music to flow freely and the listener to savour all its sounds and subtleties. Given the overwhelming and near-operatic soundscapes that all but engulf the listener in their hellish surrounds, the fact that multi-instrumentalist Cuervo and vocalist Fornost are working with a limited range of instruments, and fairly conventional instruments (guitars, bass, drums and percussion, piano) at that, along with whatever the Exhnihilo Records studio can afford in the way of recording and sound production equipment (and Nicaragua is one of the poorest nations in the Americas), is nothing short of astonishing. This is a recording where the Reflection of Misery men, using all their skill and experience as composers, musicians and sound engineers, have brought forth a mini-opera of sheer terror and ambient drama. They play and perform as though possessed by powers far beyond our ability to comprehend and to confront.

The titles of the four songs are of the overblown sort but the music they describe has a life-force all its own, held together by dark cavernous ambience and near-continuous demonic vocals that prattle, groan and growl out ominous speeches. Even with the pauses between songs, the music appears more or less continuous as individual songs are not distinguished by repeating riff motifs or distinct rhythms or beats that would set them off against one another. Low-pitched voices emanate from deep subterranean caverns, echoing through tunnels. Guitars and drums keep up a constant competition with the monstrous vocals: the drums have a crisp, choppy sound contrasting with the hypnotic jangly sound of the dissonant tremolo guitar chords. A considerable portion of the recording consists of background ambience, at once still yet restless, quiet yet rumbling with activity.

The creepiest track out of the entire set turns out to be the shortest: this is “Ominous Oratory” which features a near-inaudible rant going on behind droning ambience culminating in a series of high-pitched shrieks and other noises. The track following, “Corruption of Benevolence”, closes the album with doomy piano melody and a richly layered performance of hypnotic if demented guitars and percussion rhythm lines that are sometimes elegant and other times frenzied and chaotic. The voices reach another, deeper level of madness and sadness in their eternal imprisonment.

So much is happening throughout this recording – demons and other spirits are becoming restive, their world is more and more unstable and they cannot stop its downward descent – and the EP is a highly immersive work as well, yet it never feels too taxing or demanding of your attention. Not relying on dense lyrics certainly helps listeners concentrate on the music and the ambient background, and the airy quality ensures everything is heard clearly – even the blurriest, nearly inaudible voices and mutterings can be picked up. Although not long, the EP commands your attention so much so that the time seems to pass quickly and the music surely must be much longer than it actually is!