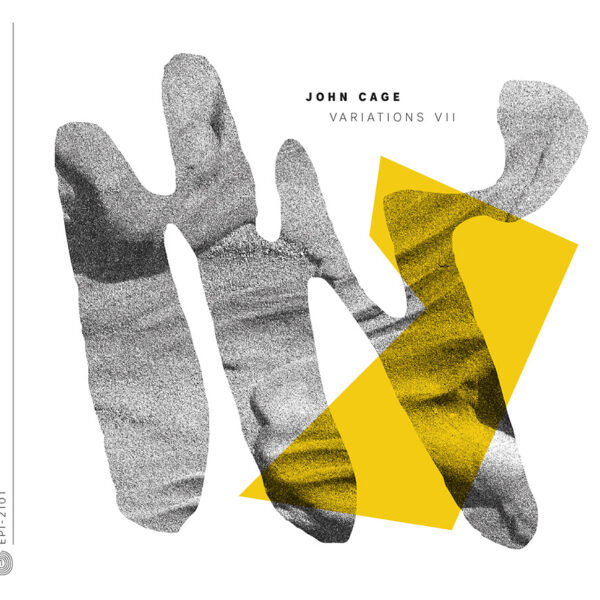 Here be a recent realisation of a John Cage work, namely Variations VII (EPI-2101), released on the label Epicentre Editions and performed by a number of European musicians, predominantly French I think…they produce a fascinating and rich mix of unusual vaguely electronic sounds, mixed up with much vocal additions, including speech and utterances from the audience. I spun this one “blind” before I read the notes, and very much enjoyed not only the full 68:17 mins of the main event, but also the warm-up chatter which has been included as an introduction, and the audience applause at the end of this live event which took place in August 2020, as part of a festival called Le Bruit de la Musique. The dense swirl of this combined sound reminded me, in places, of AMM – probably due to transistor radio bursts suddenly booming in with pop music beats unexpectedly appearing in the atonal morass – and also of that large-scale improvising orchestra, MIMEO, who around 2004 took the “laptop music” thing into unexpected places with their collective explorations and long-form improvisations with computers, radios, live electronics, and synthesizers. This record has some of that same nebulous quality, of music and sound coagulating like so much benign gas. It also has the same leisurely pace, and even if this record occasionally gets loud, it’s never aggressive or alarming. Very coincidentally, Jérôme Noetinger was in MIMEO at that time, and he’s here on this record too.

The work is a 21st-century update on Cage’s original idea, which I gather was originally realised in 1966 in New York City, with the help of a number of gifted technicians (rather than musicians), and the inestimable David Tudor. The plan behind Variations VII was to make use of “communication bands”, which in 1966 meant telephone hook-ups…so sounds from selected rooms and environments were effectively “dialled in” to the concert venue, where the technicians amplified them using microphones. Radio sets were part of the deal too of course, and much of the sound in the concert was created using plain household objects, and frequency generators. This being Cage, I guess the process that’s relevant is the randomness of the whole situation, randomness magnified and emphasised…whatever sounds are happening around us on that particular time and date, and in that specific locale, that’s what becomes the concert. Our canny Europeans have gone to some lengths to replicate and improve on this original concept. The main thing to note is the six musicians / players in the room, among them the percussionist and improviser Lê Quan Ninh (who also recorded the date, and wrote the annotations). A further 17 players are credited as “A Distance”, i.e. located in remote sound sources and sending in their sounds by any means possible. Just reading the credit notes herein, we see a considerable list of equipment in the hands of the six “sur place” players, including numerous household objects, radio sets, cassette players, record players, microphones and contact microphones. Most intriguingly are those devices equipped with photo-sensitive cells – because they could turn other electrical devices on and off whenever there was motion in the room, as we’ll see shortly.

The notes remind us that there is no formal score for Variations VII prepared by Cage, which seems to fit with what I understand as his general plan to disrupt and confound our normal expectations of what music and composition mean, but the players relied on the help of Julie Martin of Experiments in Art and Technology (E.A.T.), who provided certain documents, and also on the fact that a lot of the players on the record were already experienced performers of these challenging Cagean situations. They found ways of taking liberties, while remaining true to the spirit of the piece; the main way they did this was through judicious use of computers, specifically two randomiser programs called IC and TIC, created by the Canadian composer Andrew Culver for use by Cage. These were programmed with very precise information about the circumstances of the set, thus providing and generating rules based on duration, divisions between the players, the order in which sections should be played, the use of sound versus the use of silence, even governing the relations between certain objects – so the electric toothbrush could react correctly with the Lego motors. Once activated, these spontaneous sets of computer rules and routines provided just the right amount of Cagean “chance” to validate the performance. Further disruptions took place, though; for one thing, the audience could move around to get a closer look at the action, and in doing so would trigger one of the photo cells, thus causing a device to turn on or turn off. There was also some use made of video-conference software, to further enhance the actions and contributions of the 17 remote players, and the use of “time bracket scores” here start to turn the event into a Zoom call gone mad, the conflicting streams of information sublimated into musical art. At this point I’m reminded of the work of the Great International Audio Streaming Orchestra, another French project who we last heard doing their thing in 2014. it’s not exactly analagous, since the G.I.A.S.O. makes much more use of the internet and makes a virtue out of transforming “harvested data” from the web into noise, but even so it’s not too far away from the Cagean plan of “tuning in” to whatever sounds may surround us in the modern world.

I was personally surprised how much I enjoyed this one as I’ve often found myself at odds with the work and philosophy of John Cage, but this version of Variations VII is very accessible, highly listenable, and realised with great conviction and innovation by the talented creators. In fine, a delightful “sprawl” of sound which successfully transcends the process by which it was made. From 21st June 2021.