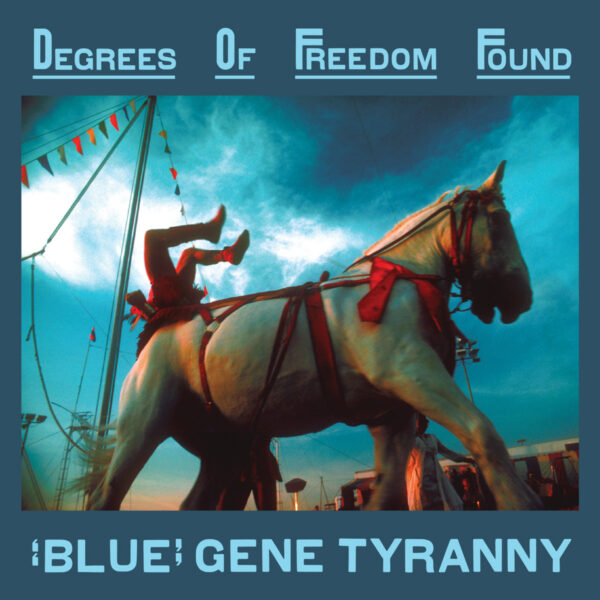 I think we first heard the music of “Blue” Gene Tyranny in 2008 when the label Unseen Worlds sent us a copy of Out Of The Blue, a remastered CD version of the 1977 LP made for the Lovely Music label. I was swept away by this and subsequent releases from same label, such as Detours (a set of more recent piano music). Given the composer’s penchant for jazz, melody, and song, I entertained a rather extravagant what-if fantasy in my mind, in which he might have been associated with well-produced best-selling rock acts of that period, such as Steely Dan or Joni Mitchell. However, this is just by way of noting how accessible his music is. Now today comes Degrees Of Freedom Found (UNSEEN WORLDS UW35), a six-CD box set which is part archival retrospective, part new material, and contains so much music that I intend to review just one disc at a time. “Blue” Gene – real name Robert Sheff – has provided extensive annotations for each track inside a lengthy booklet, and all discs are packaged in their own card sleeve printed in full colour. The images – photographs by Philip Makanna – seem to tell a story of an imaginary circus or carnival.

On Disc 1 we start out with four instrumentals all recorded live (by David Weinstein) in New York on the same date in 2004, all of them quite languid and romantic in tone, expressing a certain nostalgic longing. With ‘A Letter From Home’, we see right away how Tyranny doesn’t draw any lines between composition and improvisation, and here he freely improvises on his own piece of this title from 1976. He also demonstrates how he can build music out of elements which (to me) seem almost evanescent – chord progressions, harmonics, and finding unexpected new chord combinations from the roots of just six chords. On ‘Spirit’, he further explores these ghostly harmonics and educates us about something called “artificial harmonics”; it’s based on a deep knowledge, I assume, of how pianos work and how to create “soundless” chords when playing. This track has been assisted by Tom Hamilton’s computer editing and playbacks of recordings used in performance; it may sound like electronic music, but in fact is entirely produced by this all-acoustic process. Again, the pianist leaves himself gaps to fill with his romantic trills. The ‘Spirit’ of the title evokes the banshee from Irish mythology, by way of Henry Cowell.

‘The 36 Chords From The Driver’s Son’ looks ahead to Discs 3 and 4, which contain the entirety of The Driver’s Son, a performance piece from 1989. On this 2004 improvisation, Sheff selects 36 discrete subjects from the written text (or storyboard) of this piece, and associates a chord with each one. Once again he delights in “surprising combinations” when he starts to put these chords together. Without much fuss or bother, he bypasses traditional chord modulations in this 15-minute improvisation; my musicological skills aren’t up to the task of spotting these unconventional twists and turns, but the music is full of warmth, and nary a jarring discord in earshot. Knowing that it relates to a story helps one to understand the semi-narrative quality of this piece, as if hearing an anecdote rolling out in piecemeal style. Melody, harmony, narrative; all things in music that so many modernist composers hated, and in some cases spent their entire careers attempting to destroy. Tyranny was clearly an exception.

While ‘The Invention of Memory’ is just 74 seconds long, the story behind it is an interesting one based on the composer’s reading of a book on the subject of how memory works. He saw a relation between the process of remembering and forgetting and the way that music is composed. This gave him the idea to compose a piece of chamber music where a certain “type” of memory (lifted from the pages of the book, presumably) could be associated with a very specific musical form. The work may end up saying something about human psychology; it also references Bach, simply by using the term “invention” which was one of Bach’s ways of indicating the need for improvisation in a score. Once again we see the unique process of building a composition through the association of things, unexpected source materials and foreign bodies, with musical elements; one begins to see an outline of the unique contours of Sheff’s mind.

‘Time Transposing Pianist’ is an earlier performance from 1992, where the pianist is joined by Jeff Berman on a Midi vibraphone and Bill Ruyle on marimba. When he describes “vertical chords” and “collapsing horizontal lines”, I admit I’m at a loss, but the gist of it is Tyranny improvising his concise piano runs on top of a steady rhythm provided by the percussionists (although they too have certain freedoms built into the score). One is tempted to compare this to the music of Steve Reich – the regular pulse, the use of percussion – but Tyranny’s work is more open-ended, more ambiguous, and the musicians play with more swing feeling and syncopation than any Reich ensemble. The simple change from horizontal to vertical is what is supposed to produce the time-transposition effect here; it certainly contains very unexpected stops and starts, unusual dynamics and musical pairings, and in its gentle unassuming manner is probably quite a radical piece of composition.

From 2001, ‘On The Road To Blountstown” features the jazz viola player Leroy Jenkins captured at an impromptu moment when they had ten minutes of time to fill on stage at a concert. It contains some amazing moments of viola and piano interplay that indicate a strong rapport between the duo. Jenkins uses the opportunity as a raconteur, telling a story about being stopped by a Sheriff in the South when playing a jazz tour in the 1950s. He turns the anecdote into a short snatch of song-speech. This unusual item brings CD 1 to a close. From 17th May 2021.