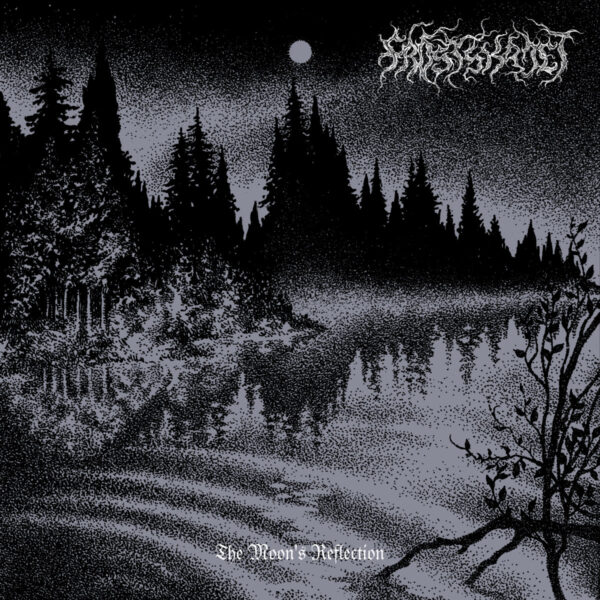 Reading a little about this album on Frostskadet’s Facebook page, I was impressed to see that Frostskadet – or rather, T.A. the sole member, based in Tasmania, behind the project – had started writing and recording songs for the album while still at high school back in 2007, and 14 years later not only finished the whole album (including its mixing, recording and production) but also had it released in CD and cassette formats through Polish label Wolfspell Records. A real Labour of Love, I would call this! And the love that went into this album is obvious through the thought and care T.A. put into composing and playing the songs. Combining raw and noisy BM aggression with gentle and soothing acoustic-guitar melody, the music delivers soundscapes of cold wintry introversion and melancholy. Though plenty of fury abounds in the grinding tremolo guitar riffs and the hard-pounding drumming (courtesy of a session musician), a calm if perhaps aloof serenity provides firm grounding and stability. The music has a pristine sound with everything, even the quietest tones, clear and almost sparkling.

The five songs are fairly long, all of them over the six-minute mark, and maybe they could have done with some editing for length: the title track especially features soft and unobtrusive if rather long acoustic guitar introspection in its first half which might test quite a few people’s attention spans. The music is really at its best when Frostskadet is going full tilt with searing, grinding guitars, blast-beat percussion frenzy and harsh cold-blooded chanting vocals. The better songs on the album, like “Leaves on the Freezing Wind” and “Into the Swamp of the Witch”, do more with the polarised nature of the music: they allow the quieter and noisier aspects of Frostskadet’s style to share some of their elements so that the acoustic music gains some assertiveness and the burning guitars and slavering vocals are highlighted even more by the silent background ambience. Closing track “Hunted in the Falling Snow” experiments even more with its sounds: bleeding-eardrum raw noise guitars, cold space-ambient tones, mournful solo violin and changes in key make for an almost post-BM song filled with intense emotion and longing.

Knowing the effort that’s gone into this album – apart from the drums, T.A. wrote and played all the songs, and mixed, recorded and produced the whole work himself – I feel bad at having to pick at it, especially the title track which is the oldest and longest song on the album, and which is less polished than the rest. The acoustic music here doesn’t do much for the song, not pushing it forward much and as a result the song loses some impact. Including the song with all its flaws though – and how it contrasts with later songs on the album – helps to demonstrate how much the entire recording encapsulates T.A.’s development as a composer, writer, musician and producer. The album’s sound seems thin and a bit underpowered as well though that may be a consequence of whatever recording equipment and facilities were available to the musicians at the time of recording. I don’t doubt though that future recordings from Frostskadet will improve on the debut, in terms of song composition, performance and a fuller sound that better displays and highlights the project’s style.