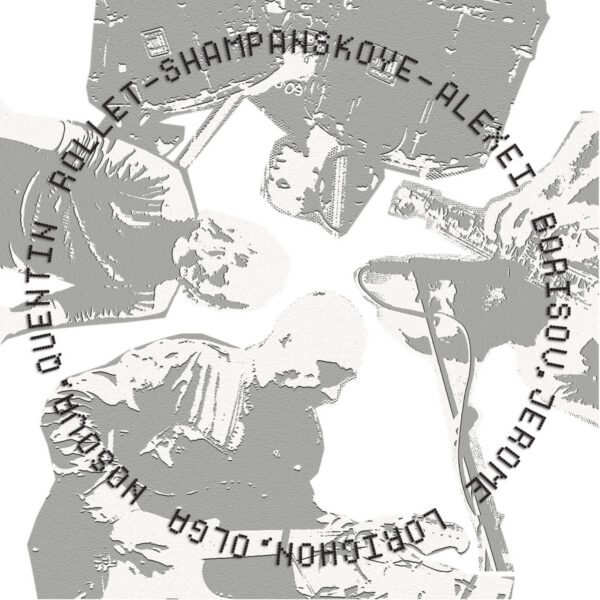 When he was still running the Rectangle label, Quentin recalls that he met Alexei Borisov in the 1990s and always regretted that they could only meet for a brief time, and never managed to record together. The opportunity finally arose in Paris in 2014, when Alexei’s duo had a day off from touring, so he and drummer Olga Nosova arrived at the studio where, as it happens, Quentin had booked a session with the all-rounder instrumentalist Jérôme Lorichon, credited on this record with live electronics. Sonically, it’s a real clashing-rocks epic of instruments – guitars, drums, saxophones, effects pedals, weird electronic swoops, and occasional vocal yelps and cries hurled into the arena (which often resembles a battleground).

Plenty of odd noises to savour, but the actual improvisatoins can be a bit aimless – three rather long pieces at the start seem to require that a lot of playing time is eaten up by the four consuming spoons, yet nothing much gets delivered by the end of the newspaper route. I have heard records by Astma where they get much more agitated, rough, and even confrontational than they do on here, and we get the impression of a dinner-party where the “bohemian” guests are having to dial it down a couple of notches and pretend to enjoy the glass of Cotes Du Rhone, when they’d much rather be drinking strong beer and looking for a punch-up in the street. However, it’s the business of a good co-operative improvising musician to find middle ground and build consensus, and for the most part the foursome manage to do this well, overlapping on the shared ground of weird abrasive noises.

For me the party livens up on the shorter cuts on the second half of the platter, such as ‘Outrock’, 68 glorious seconds lurching about like a glorious send-up of Amon Düül crossed with Kaoru Abe, or ‘Yellow Jacket’ whose title reminds me of the glory days of Yellow Swans and where today’s combo finally find their “rock” groove and prove they too can be as dangerous as the Saloman and Swanson team of 2003-2004. I also dig the alien weirdness of ‘Umka’, not only for the far-out electronic gloop that bubbles around our ankles, but also the unhinged voice contributions of the lovely Olga, making us wish she’d been allowed to unclamp her metal gag for more of this particular sesh. The closing bash ‘Chainsaw Zombies’ has a great title for sure, but the tentative and unmeaning diddling sounds here fall far short of the implied violence and horror.

The album name Shampanskoye refers to a type of Russian champagne which I have never imbibed, but the word has an interesting history – in July 2021 there was quite an uproar when President Putin decided to restrict the appelation to domestic sparkling wine only, thereby sending a deliberate snub to the French scheme of Appellation of Controlled Origin. In this context, the image (printed on the disc) of the wire cage that holds a champagne cork (called a muselet in France) becomes rather poignant. From 21 June 2021.