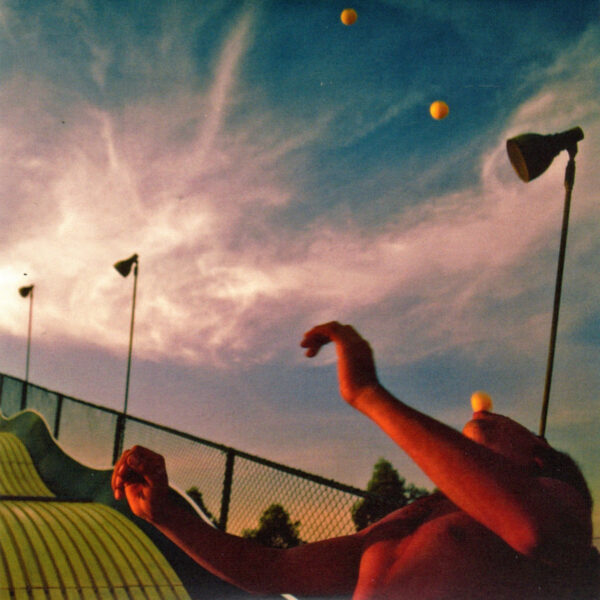 The set opens with the three not-unrelated parts of ‘Dreamtime’, a suite performed on synthesizer by the composer in 1980 and 1986. They relate to “Blue” Gene’s understanding of “the dreamtime” within Australian mythology; he seems to have been struck most of all by the time-travelling aspect of it, and the supernatural powers of these ancestors and their deep connection with the landscape. The music has also been used in a theatre context. On first spin I’ll confess I was underwhelmed by these instrumental pieces which seemed rather lightweight, and close to New Age music in their melodic simplicity and quasi-mystical atmosphere. As noted previously though, “Blue” Gene does not always behave in the way we might expect of an avant-garde composer. I’m now learning to love the understated low-key charms and minimal rigour of ‘Dreamtime’, especially the third episode called ‘Blue Moon Rye’ which namechecks both Moondog and Terry Riley (two long favourites of this listener), as well as his own nickname. “Riley invented what I call pattern music”, states the composer in this warm tribute.

‘Tango For Band’ is one major highlight of this box set for me. Credited to Peter Gordon and The Love Of Life Orchestra, a touring band which Blue Gene played with for many years. I suppose they could be said to play a form of big band jazz, but then there’s the very odd Star Jaws album from 1977 (on Lovely Music), which is not too far away form orchestrated disco with aspirations to soundtrack music. On this particular cut from 1985, the credit roster is almost a who’s who of avant-garde players – Jon Gibson, Richard Landy, Peter Zummo and Neb Sublette are all here, moonlighting from gigs with Philip Glass, Glenn Branca, and Downtown Ensemble. This 10-minute tour de force – dedicated to fellow band leader Carla Bley – is a masterpiece of intricate dynamics, tricky rhythms, and interwoven melodic lines, all the more remarkable for the fact that every part of it was meticulously scored and notated by the composer. There’s something uniquely American about this joyous and boisterous “circus jazz” piece, except that its creator is too modest to affect the pretensions of a larger-than-life Barnum-styled ringmaster character.

‘Tango For Band’ was originally written for piano alone, making me wonder if “Blue” Gene Tyranny had any aspirations to emulate the complex player-piano scores of Conlon Nancarrow. I had the same impression from ‘Any Fine Afternoon’, a 1983 jazz-ish instrumental realised with multiple overdubs of piano on top of what I think is an instrumental backing made with synths and drum machine. Like the above, it’s full of a “joyous rhythmic complexity” that’s not only infectious, but guarantees multiple listens. The composer improvised all of these piano runs at a single recording session. It seems to have had its origins in the soundtrack for a teaching video, from when he was working at Palo Alto.

‘Meditation for Trio and Chamber Orchestra’ goes some way to reminding us of the avant-garde side of “Blue” Gene Tyranny. I had no idea that he had a piece performed at the ONCE Festival in Ann Arbor in 1963, which I mention as it’s an event that’s become something like a touchstone for me of a certain strain of American modernist music. What’s more, it was a graphic score (another one of my ongoing preoccupations), although the composer doesn’t see fit to expand on that aspect of the piece. What he’s done here is combine the 1963 recording (conducted by Bob James, who made the untypical Explosions LP for ESP-Disk) with a later recording made in a New York studio in 1993, crediting soloists for vibraphone and marimba. In creating this audio palimpsest, Tyranny wishes to illustrate something about how it’s possible to realise many different-sounding pieces from the same composed source.

This particular disc seems to have occasionally highlighted the composer’s dexterity in realising a work of some complexity, an observation which also applies to the last cut ‘Sleeping Beauty in Camouflage’, composed in 1992. Originally scored for piano, vibraphone and marimba, but here remade using synthesizer parts, a decision that was deemed necessary in order to get closer to the required degree of precision. Despite its laid-back and unassuming air, this piece is devilishly hard to follow, with very tricky time signatures and ingeniously interlocked layers of instrumentation. At one level, it’s a more user-friendly and less bombastic take on what Frank Zappa was trying to do, especially with material like the ‘Black Page’. The compositional density here appears to have been mapped out from the study of mathematical grids and structures, specifically concerned with cycles of the sun and the growth rate of a certain cactus (!). I’ve heard other contemporary composers attempting to recast scientific data as music, but it so often ends up boring process music; not so here. The composer also entertains, and expresses, philosophical notions about how the brain behaves during the act of creativity. All that in just 6:46 minutes; the takeaway from today’s spin must be something to do with the composer’s gift for compression, for expressing rich ideas inside a very tight packet of musical information.