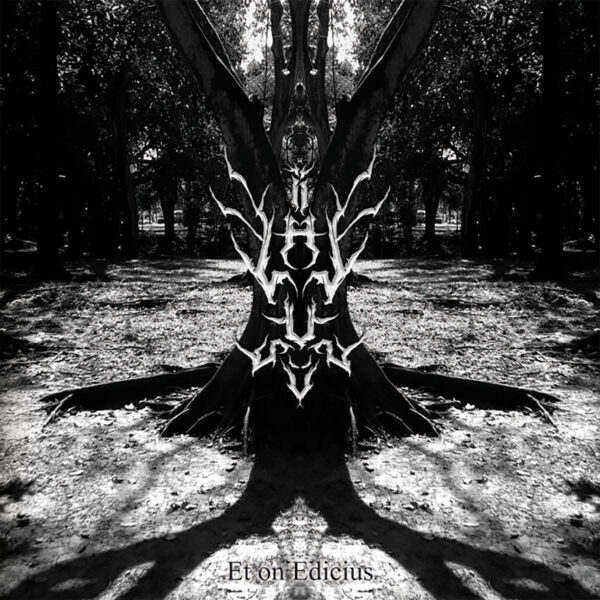 Released as an EP, this limited edition cassette – there are only 60 copies available – could have been put out as an album, being well over 40 minutes long and featuring quite significant work in six long songs from the Thai-based duo Ihllus. Until “Et on Edicius” came out in March 2022, Ihllus had only released one single and another EP (which at just two songs was more like another single with a B-side) to their credit. The band focuses on playing atmospheric black metal, and very depressive doomy atmo-BM it is too, with vocalist / lyricist Ihllus almost crying as he screams his heart and soul out in ragged raspy tones, with dark ambient and blackgaze influences. The other Ihllus member Snake plays all the instruments and writes the music.

Ihllus play quite a majestic, epic style of bleak and raw atmospheric BM with a harsh and corrosive sound behind which some surprisingly clear if cold, pure-toned keyboard melodies and ambience can be present. The tremolo guitars emit a sharp chainsaw-like drone which can actually exert a calming influence along with sighing synthesiser tones or plaintive piano tunes at times when the music slows down to a glacial pace. The drumming is busy but quite low in the mix so the focus is thrown onto the guitars and the emotional if spidery vocals.

Of the six songs (all falling within the 6 to 8-minute range), the track that stands out as most representative of Ihllus’s style is “Hadean”, which starts out very mournfully with a sombre solo piano melody that erupts into a slow melancholy mix of droning atmo-BM and melodic post-BM with the addition of a lead guitar solo, all accompanied by agonised screams and icy keyboards. The song’s emotional range extends into aggression and anger before finally lapsing back into hopelessness.

Melancholy, grief, anger and anguish may be plentiful across the six tracks – and yet the overall impression I have of this EP is an orderly work of serenity with all the instruments working smoothly together while Ihllus (the vocalist) carries most of the emotional burden. Guitar riffs verge on pop-friendly but, perhaps because of the slow pace, don’t jump out as much as they could. The acidic nature of the production, while it gives the music a harsh raw edge, tends to flatten the music when it most needs to sound full-bodied. It’s possible that with a cleaner production, Ihllus might lose the raw tone but pick up sonic depth and a sense of dark isolation and alienation.

For a band that has existed only since last year (2021), this EP is a well-crafted release though it can be monotonous and lumbering, and needs a spark of energy in later songs.