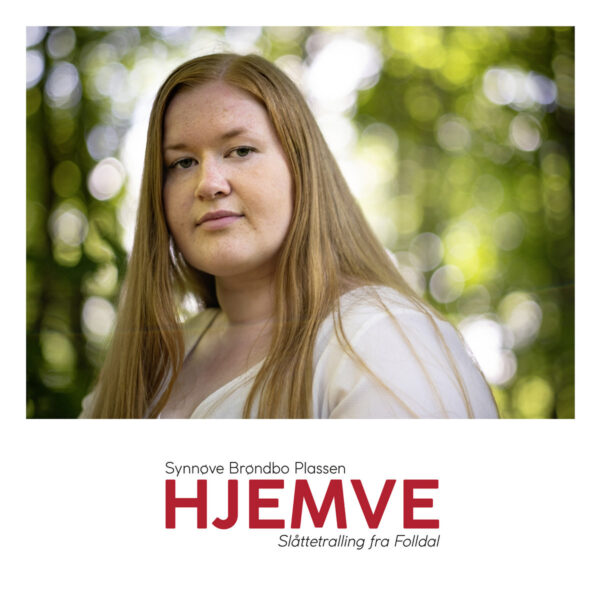 Rising young folk music talent Synnøve Brøndbo Plassen has a bright future ahead of her if this, her debut solo album, is typical of what she has been doing so far and plans to do as a singer. She performs all songs bar one on “Hjemve – slåttetralling fra Folldal” entirely a cappella (that is, without musical accompaniment) with the aim of highlighting the vocal folk music traditions of her home in Folldal, a municipality in Østerdalen in eastern Norway near the Swedish border. (The sole exception “Heilo” appears to be a collage of birdsong field recordings.) Through her own research stemming from a childhood interest in vocally imitating tunes and songs played by folk fiddlers, Plassen discovered a local Folldal tradition of dance and instrumental folk music performed vocally and that many musicians in her area, including her great-grandfather, had learned to play the fiddle by listening to singers. Thus was born an ambition to bring what might be called (if awkwardly perhaps) vocally performed instrumental folk from Folldal to a wider audience and “Hjemve …” (the word “hjemve” means homesickness in Norwegian) represents a first step to call attention to a perhaps previously underrated genre in Norwegian folk.

First track “Bom-bom-leiken” is an apt choice to introduce audiences to what Plassen has in store on this and hopefully many future recordings: a beautifully angelic voice, lively and flexible, singing improvised nonsense syllables to carry distinctive tunes and any emotion associated with these. Plassen’s control over her voice, without the need for auto-tuning, and the clear purity of her tone are impressive. On quite a few tracks listeners can hear a beat that helps anchor the tune and its pace. Some unkind people might think that an album consisting solely of one voice singing 22 songs will become boring quite quickly but Plassen’s choice of folk songs dispels doubt: the emotion she expresses in the songs ranges from sheer joy and exuberance in being alive to melancholy and longing. The tunes have a very distinct, sometimes undulating flow that can be hypnotic in a deceptively simplistic way.

Though the great majority of songs are less than three minutes in length, they have a strong, regular rhythm with a definite mood or emotion that draws in listeners: time seems to stop and for what seems like quite a long time, you are borne away to a world that seems clear and pure and innocent. Many songs like “Sigrid Sanden” sound a bit like what I imagine folk songs intended for children to learn music and to sing might be: in addition to having a sprightly tune and lively beat, they feature repetitive improvised syllables as well as actual lyrics.

This is a very impressive debut from a folk singer / musician at the start of what will surely be a very unique and idiosyncratic career in traditional and contemporary Norwegian folk.