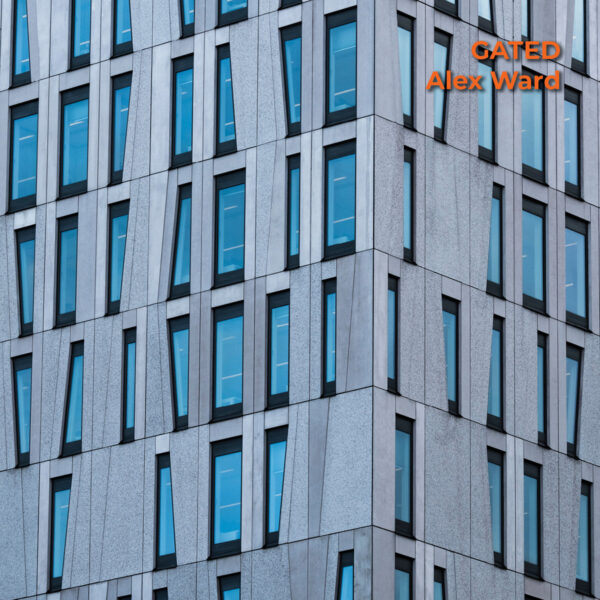 UK improviser Alex Ward was, when he started out, something of a wonderkind in the world of UK improvisation and I believe Derek Bailey took him under his wing for Company Week, admiring Ward’s clarinet skills and the fact that he played a free improvisation piece on his school’s stage while still a teenager, much to the consternation of uncomprehending head teachers and frowning parents (or so the story goes). Ward went on to blow with a number of prominent UK improvvers, including Steve Noble, Tony Bevan, and the composer Simon H. Fell, and in recent years he was one of the guitarists playing in the touring band This Is Not This Heat.

Ward’s here today with Gated (DISCUS MUSIC DISCUS 114CD), which turns out to be an entire suite of compositions written by him and performed entirely by himself at home, using overdubs of woodwinds, guitars, bass, keyboards, and various software instruments. He used his lockdown time (it was made July 2020 – March 2021) for a period of solitary contemplation and reflection on his various musical achievements over the last 30 years, so that what surfaces on Gated is an intriguing mix containing elements of jazz, improvisation, 20th-century composition, and avant-rock moves to boot. The press notes tell us we can even hear elements of AACM creative music and “post-Darmstadtian chamber-rigour”. The album is front-loaded with several upbeat free-form rock thrash escapades where Ward picks up his guitar and lets fly, including ‘The Celebrated Restriction’ and ‘Buyout’, the latter of which I can’t help hearing as flavoured with Charles Bullen-styled angst and mannered Sonic Youth discordancies.

Thereafter the record moves into more atmospheric realms, such as the somewhat haunting ‘Stilled’ which fills its abstracted grey horizonscapes with percussive stabs on piano and vibraphone, all designed to create a certain amount of mental disruption in a vaguely post-serialist manner. Not averse to jazz, Ward also tries his hand on the Fender Rhodes piano on ‘The Bradford Factor’, a brief sojourn which might just appeal to Herbie Hancock fans were it not so astringent, deliberately sidestepping melody in favour of a sort of tricked-up vampery. There’s also ‘Let’, which to me is a pure Frank Zappa pastiche – overdubbed horns and percussion coalescing into a near-perfect imitation of The Mothers of Invention circa 1968-69, executing a complex melody in the mode of Studio Tan or Orchestral Favourites.

In among these very eclectic experiments there sit two rather lengthier pieces – the 18:23 minute ‘Hewn’, which is largely formed from a clashing of ugly detuned guitars slammed together to create turbulent effects, gradually inching its way towards “noise” music, except that it’s very evident Ward is too concerned with form, melody and composition to completely surrender himself to the sheer chaos of table noise or harsh noise. To put it another way, even at its most overcrowded and stormy, ‘Hewn’ still finds room to accommodate another guitar solo from its composer. The second long item ‘Cushioned’ at 14:38 shows how ably Ward is able to negotiate a precarious position between jazz and composition, as he executes very fluid clarinet runs on top of an elaborate array of tricky massed chords played on piano and other keyboards. Like much of the music here, ‘Cushioned’ barely gives the listener a chance to take a breathe, so rich with invention and detail it be, one curlicued shape piled on top of another like an avant-garde form of Baroque architecture.

We’re invited to admire the “compositional structure” of the 10 pieces on Gated, but to my mind composition is not really Ward’s strong suit here; rather than thought-through works with a certain shape, or considered dynamics, or an underpinning theme, these are more like springboards for Alex Ward to demonstrate his virtuoso technique, the speed of his fingering, his prowess with clarinet, keyboards, or guitar – and of course his studio craft, with layering and overdubs. One admires the skill and accomplishment, but a bit of me yearns for a repeated pattern or a root note, a satisfying conclusion, anything to help anchor our senses in this whirlwind of elaborate and dense musicality. From 6th July 2021.