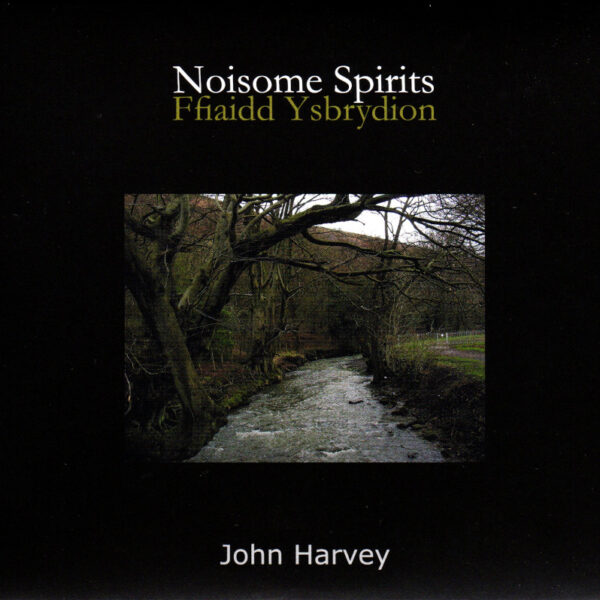 Noisome Spirits (SCREEN AND SOUND ARCHIVE GENCD8005) is the fourth record we’ve received so far from John Harvey at Aberystwyth University, and the latest in a series which started with 2015’s RRBVEETNSOA, followed by The Bible In Translation and The Biblical Record. There’s a linking theme across his work to do with religion and the spoken or printed word; accordingly much of his work has involved making use of recordings of the human voice, for purposes of sampling, edited, looping, cutting-up, and general musical construction. Noisome Spirits departs from this trend somewhat, as it’s largely an “instrumental” record, comprising eerie sound art and strange electronic music realised by John Harvey, and for the first half there are no spoken word elements on the disc at all (incorrect; see below). This direction changes on the latter half of the record, starting with distorted voices which appear on ‘John Ab John’ and continuing with the unsettling wailing on ‘Like Children In Bright Clothing’, but the observation stands; the voice elements are used sparingly, and there isn’t the same obsessive picking-apart of words and their meanings we enjoyed on the intricately-constructed The Biblical Record, for example. On one level then, even without understanding the theme which John Harvey is working with, I venture to say listeners might well enjoy this record as a superior form of spooked-out dark ambient drone to rank with any latterday industrial musician’s output. Dare I say it, Noisome Spirits might almost be filed alongside records in the Cold Black Metal or Dungeon Synth sub-genres…

The record was however inspired by the writings of an 18th-century Nonconformist Minister, one Edmund Jones who served in the parish of Aberystruth. 1 He was a Calvinistic Congregationalist and his years were 1702 to 1793. In his lifetime, he published two books about the “dark agencies” that were popularly believed to inhabit the rural parish of Wales in which he served; the second of these published in 1780, was titled A Relation of Apparitions of Spirits in the Principality of Wales, and the uncanny stories within it were derived from the testimony of common people. I see that Jones has been the subject of academic study in Wales for a number of years now; Adam N. Coward, writing in Folklore #126, opined that these published accounts were “heavily coloured by [Jones’] personal religious beliefs”, and suggests that the stories themselves were “motivated by a religiously-based defensive credulity”. John Harvey however has found tremendous interest in these stories about supernatural sound apparitions, regarded as visitations from “fairies, ghosts, devils and witches”, and he takes them as evidence of “how the lower orders of society…conceived the supernatural world”. The eerie sounds are also very much connected, in Harvey’s mind, to the environment of Wales at this pre-industrial time in history, when the wild countryside was still presumably wild, and could only be travelled on foot or on horseback. Edmund Jones, in these published accounts, creates vivid pastoral vistas of “forests, woods, mountainsides, fields” which are inhabited with these supernatural agencies creating strange and wild sounds we cannot understand. It’s also interesting when we consider this was a time in English and Welsh history before the Industrial revolution, and loud noises in the air were not at all common in the quiet countryside.

These “auditory apparitions” have not been given a good deal of scholarly attention, notes Harvey, and this may be because they were fleeting and impermanent, and also weren’t recorded in the same way as other religious visitations. Religious visions, on the other hand, have produced memorable images which survive to this day in the form of drawings and engravings based on the testimony of those who saw them, and arguably it’s a culture that has passed into fine art painting too. For these sonic manifestations of the spirit-worlds from this early modern period of history, all we have to go on is printed accounts such as those of Edmund Jones; it would be over 100 years before the invention of the tape recorder, and another 50 years after that before the dubious claims of Friedrich Jürgenson and his “spirit recordings” would capture the imagination of susceptible listeners. This set of circumstances sets the scene for the task John Harvey has set himself; he is effectively trying to recreate the pages of A Relation of Apparitions of Spirits, and other written accounts collected by Edmund Jones, retrieving these lost experiences from the shared well of folk memory, and by making his very sympathetic music and sound art on this record. To use his own expression, “the suite of sound compositions…returns some of these narratives to a sonic experience.” This seems to be a way of getting inside the skin of our ancestors, inhabiting their way of thinking and ways of perceiving; John Harvey thus follows a lineage of “micro-historians” who have studied less-familiar sources to recreate the lives of near-forgotten people, historians such as Emmanuel Le Roy Ladurie, Carlo Ginzburg, or Robert Darnton.

It’s evident from the track titles that he is citing very specific texts, or portions of text, from the books which he has studied; I mean titles such as ‘Incomparable Singing’, ‘Seen in the air’, ‘This Sweet Bell Ringing’, and ‘Such a noise as if all about was going to pieces’. These titles alone are highly evocative, indicating the ways in which the parishioners were grasping for the right expression to account for the uncanny things they had experienced, and when combined with John Harvey’s sounds and music, the total effect is very strong indeed. What I particularly savour is those few instances when the 18th-century parishioners experienced something so other-worldly and bizarre that they had no terms for describing it, and resorted to metaphors based on ordinary or more familiar things (such as carriages passing by on the road). This reminds me of a certain passage in H.P. Lovecraft’s works about a peculiar colour which can’t be perceived by human senses; as Alan Moore states with some relish, it has the effect of “putting the reader in an uncanny space”.

John Harvey, with his combined skillsets of historical knowledge, textual research, creative musical capability, and a certain amount of imaginative license, has not only produced a unique work which satisfies on many levels (intellectual, supernatural, spiritual), but he also come very close to bringing the listener into that uncanny space with this record. Issued in a six-panel gatefold with evocative photos and clips from old engraved books, plus extensive notes by the creator. Very highly recommended! From 20th July 2021.

Regarding the following remark: ‘Noisome Spirits departs from this trend somewhat, as it’s largely an “instrumental” record, comprising eerie sound art and strange electronic music realised by John Harvey, and for the first half there are no spoken word elements on the disc at all.’ Actually, the reverse is true. Due to the limitations of the booklet’s size (which has to accommodate both an English and Welsh text), I wasn’t able to go into detail about the methodology. This is explained in the bespoke website that accompanies the CD and streamed releases. This explanation is as follows:

“As in the case of the previous releases in The Aural Bible series, the source material determines the process of composition. (That is to say, the creative outcome is governed by the object under scrutiny.) Jones’s accounts and the original medium of their dissemination – the printed book – serve as both the ‘score’ for, and ‘instrument’ of, their translation into a sonic form. The sounds are derived from, for example: the text of the accounts read aloud; the pages of a book being turned and riffled though; crumpling paper; and the noise made by a letterpress machine (like that which would have been used to print Jones’s books).

Moreover, the sounds of acoustic apparitions were often described in terms of what was known and comprehensible. For example, a witness claimed that the noise one spirit made was equivalent to the volume that five or six coaches made. Another described a female spirit’s voice as sounding like a drum. The Noisome Spirits suite reverses the polarity of this principle. Thus, familiar and very earthbound objects and actions are transformed into the likenesses of the screams, snarls, voices, and ferociously destructive outbursts of the dead, damned, and demonic.

The semantic content of Jones’s accounts, and the order of the events described in the narratives, inform the compositions’ substance, conception, structure, and development. A variety of natural, supernatural, and man-made sounds are referred to in the texts. They are either imitated or evoked using the derived sounds. The ‘Source Text’ (as it is referred to in the individual track descriptors) serves both as a ‘libretto’ and fountainhead of the compositional material. These texts have been variously slowed down or speeded up, played forward or in reverse, edited, reordered, modulated, and superimposed.

Some of the natural sounds mentioned in the accounts are also re-presented by repurposing (using the same strategies), recordings made of the natural world. Thus, for example, the sound of breaking twigs, heard in ‘Such a noise as if all the hedges about were tore to pieces’, is transformed into that of hedges disintegrating. Nothing is what it appears to be. The only exception is heard at the conclusion of ‘John ab John’: the sound of a solitary blackbird singing (albeit multiplied many times and rendered at different speeds), which I recorded in my garden on April 24, 2020, during the initial Covid-19 lockdown.”

The website also discloses the texts used to ‘speak’ and conceptualise compositions.