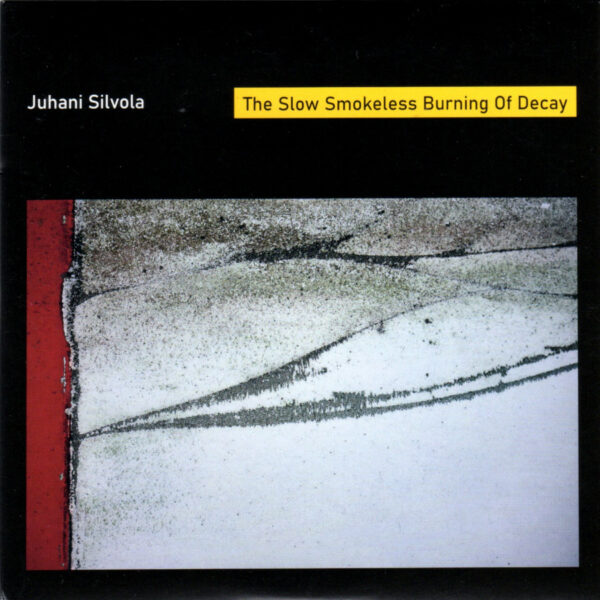 Norwegian composer Juhani Silvola here with The Slow Smokeless Burning of Decay (EIGHTH NERVE AUDIO 8nerve009), three new pieces of electro-acoustic composition released on his own label. This fellow brought us Post-Biological Wildlife in early 2019, likewise a composed piece of work with a very strong natural / wildlife / environment slant, but also attempting to demonstrate his allegiance to the French schools of musique concrète and later tape-based compositional practices.

On the new album all three pieces began life as commissions from various institutions, for instance the Electric Audio Unit or Nordic Music Days, and were originally performed live over speakers (hopefully quite loud and with many different channels). As regular readers may know, I often gripe when modern music appears to be void of content or meaning, but I’ve absolutely nothing to complain about with Silvola’s very narrative and pictorial approaches here. Each of the three pieces here is replete with ideas. The title track ‘The Slow Smokeless Burning of Decay’ takes its name from the last line of a 1914 poem by Robert Frost, ‘The Wood-Pile’. Frost often wrote about snow and ice, quite self-consciously I think, but also was very connected to nature and man’s place within it. This particular poem is intended to say something about isolation, a theme which also resonates strongly in Silvola’s musical rendition; Frost is also praised for his modern updates on “blank verse” form, and in like manner Silvola departs from conventional compositional structures to achieve his aims. While it’s possible to read this title as having high ambitions and a hidden message (a metaphor for climate change, perhaps), it’s actually quite modest and intimate. Score so far: one icicle and three snowflakes on the cold-o-meter.

Next on the roster we have ‘Five Failures in Representing our True Nature’ – a five-parter which depicts five possible metaphors for the condition of mankind. Using sounds, these episodes are deliciously literal – the ‘As Animal’ section for instance contains treated snatches of a roaring lion. The episodes become more abstract as the hypothesis proceeds – “spirit”, “mechanism”, “computer” and finally “illusion”, that last one showing us that Juhani Silvola is not afraid of introducing a metaphysical strain into his ideas. Yet at all times the sounds are rooted in the real world, and even though heavily disguised and processed, there remains a core of something recognisable in these slowly-advancing and twisty-turny gobbets of tape. With its Alexander Pope-styled theme on the indomitable spirit of mankind, the Norwegian is aligning himself with deep and ponderous ideas that Pierre Henry would have recognised, fluffing his beard and tilting his spectacles in recognition. As to his personal motivation in proposing these ‘Five Failures’, Juhani Silvola tells us “I’ve always fought against identity as an idea, as it limits human potential.” Given the “computer” chapter here, it’s possible that Silvola has managed to tap into something very relevant, at a time when so many of us are continually having our personalities defined and shaped by the imperatives of our personal and work computers, our smartphones, and the dictates of social media and shopping platforms. On the other hand, that “digital life” aspect isn’t explored comprehensively in the composition, and our friendly Norwegian isn’t adopting an especially critical position. Score so far: 2.5 social science benchmarks, and a special bonus point for philosophical ruminations in sound.

Further musings about society are detectable in the last piece, ‘Like Garlands of Flowers Spread Over The Chains that Bind Us’. Jean-Jacques Rousseau penned the famous phrase “Man is born free, and he is everywhere in chains” in The Social Contract, an early modern work of philosophy published in 1762, which apparently had a profound effect on politics and societal change in the centuries that followed – it’s still being used to inspire efforts at the United Nations Refugee Agency, for instance. Well, old Johnny-Jack was equally pessimistic about the value of art and culture in society, and saw it as little more than a way of “decorating” the chains that restrict us – hence the “garlands” in the title. This dim view proposes that art is an entertainment, a pastime that conditions us to enjoy our own slavery. You can see easily enough how this line of thought led to Guy Debord and his ideas about The Society of The Spectacle, a Marxist-inspired notion that was eventually debased and popularised in the first Matrix movie. Anyway…Silvola’s musical endeavour here conveys none of that pessimism, and instead muses on the striking image of “an artist wandering amidst huge iron chains and decorating them with flowers”. Unlike the ‘Five Failures’ suite, this one doesn’t appear to draw any conclusions, but it does manage to convey an unsettling, troubled mood. In its subject matter at least, this is the one easiest to align with the works of Henry Cow, and at a pinch it might have found a home on the Western Culture LP.

In all, a very accessible set with its thought-through compositions and its pictorial, relatable sounds, showing Silvola’s success in devising “sonic narratives on multiple temporal levels”. From 5th August 2021.