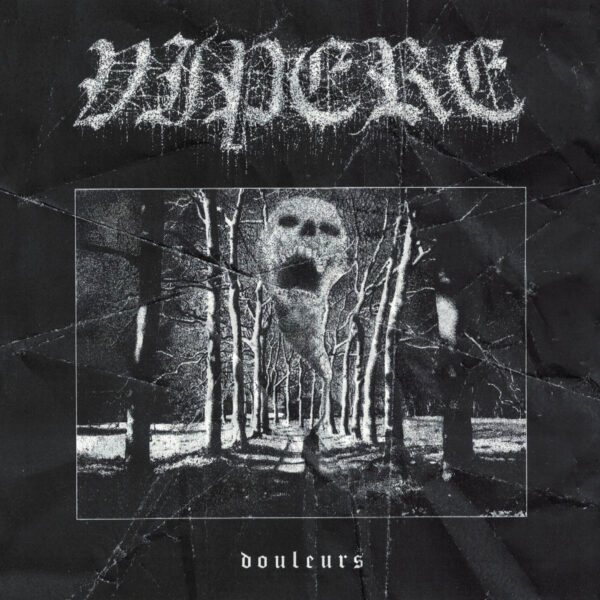 I had heard of French raw BM duo Vipère way back in 2021 when they released a demo and I anticipated that they would soon bring out their first album. Eventually they did nearly 18 months later in digital format and the CD digipak version is scheduled for release in July 2022 by Vetus Captra, a very small underground label in Nantes specialising in black metal and hybrid BM genres. Of course the other thing about “Douleurs” that got my attention was the alarming front cover artwork with the over-sized head trailing a ropey neck and a shadowy figure.

Vipère play raw black metal with a strong mediaeval folk element that includes acoustic guitar and flutes. The fun starts with “Aspic” which features both the folk and raw BM sides of Vipère: gentle acoustic guitar melody suddenly meets a tornado of scrabbly tremolo guitar, the tinniest and trashiest percussion alive – as if Sans-Visage, one of the musicians, was hitting stretched-out aluminium foil without tearing it – and Saros pouring his heart and soul into the French-language lyrics in a distorted vocal that makes him seem as if he’s giving an old-fashioned radio broadcast from a hidden room and we’re hearing this stuff on an ancient radio that only uses AM broadcasting signals. Though the music is frantic and sounds brittle and tinny, the melodies are clear and the singing spits bile and overdone melancholy in equal portions. The tracks that follow sound a bit better and the melodies are much clearer with a strong rock’n’roll groove tendency. “La Bourgade et le Dandy” may rocket along at breakneck blast-beat speed but it packs in a hard-driving headbanging riff early on and an extended bluesy guitar instrumental with sighing synthesiser wash together with Saros’s own screeching antics.

The album takes an interesting turn into moody dark blues with “Haine d’honneur” which never really goes away despite Saros’s clowning around. At one point in the track the music sounds faintly Middle Eastern and at its end the flutes, guitars and synth join for a gentle mediaeval melody while Saros still rabbits away. The mediaeval folk music theme continues in “Cheval” with a soft background female vocal before it gets king-hit with more abrasive raw BM aggression. The closing track is a ragged screaming cover of fellow French band Epheles’s “Profanation” which does not sound very different from the original.

While the mediaeval folk music has a strong flavour that’ll have BM fans hanging out for more, and songs occasionally dive into some really gritty music, the album is basically hell-for-leather noisy melodic BM attack playing second fiddle to Saros’s crazed singing. It’s not bad but not outstanding either for French black metal.