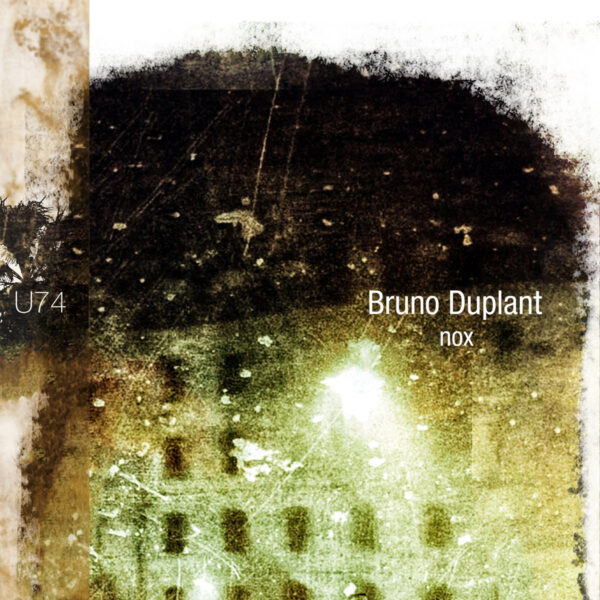 Based in northern France, Bruno Duplant has been an active composer / musician / sound artist for many years and has had work published on several labels including his own Rhizome.s (co-curated with Pedro Chambel) and Unfathomless. “nox” is Duplant’s second solo work for Unfathomless and if you’re counting collaborations with other musicians, his fourth recording for the label. According to the Unfathomless website, “nox” is based “… on the multiple meanings and interpretations that can be made of the incomplete form of the dactylic hexameter and palindrome In girum imus nocte ecce et consumimur igni …”  Often attributed to Virgil, this Latin phrase, loosely translated into English, means We Go Round and Round in the Night and are Consumed by Fire and is a metaphor referring to moths that circle around a light and end up being burned. The phrase is also the title of the last film made by French Marxist philosopher / film-maker Guy Debord in 1978 which is an essay on the nature of capitalist society, the rubbish it has produced that supposedly passes for culture and art, and the desire, avarice, cruelty and violence it encourages and rewards. We humans continue to be drawn by the superficial glamour and seductiveness of this rubbish culture and keep trawling through it again and again even as it consumes us and ultimately kills us. While our materialist obsessions hold us spellbound, the consequences of our decisions and actions wreak havoc across the planet in various global crises as the West desperately hangs onto ideologies and values that increasingly become hollow and self-destructive, and demands that others do the same under threat of invasion and regime change.

From unprepossessing crackly beginnings and stretching to 40 minutes, “nox” develops into a very multi-layered and lush work of field recordings, samples and strings of dancing tones that might almost form fragments of melody if they were close enough to meld into one another. A veritable little environment, fragile yet busy and energetic, grows up. In the last 10 minutes there emerges a steady droning tone in the background that seems very ominous behind the crackling and the bubbly noises. The danger creeps up steadily and relentlessly, water starts boiling, and a breaking point looms on the near horizon.

For such a long track of low-key crackle, drone and noise, “nox” turns out to be a fascinating and enthralling work that invites close listening: an irony in itself, given that it’s inspired by and based on interpretations and extended metaphors of a visual concept. The soundscape that evolves on “nox” exerts its own magnetism on listeners who may feel themselves drawn into its inner reaches … and end up being consumed themselves.