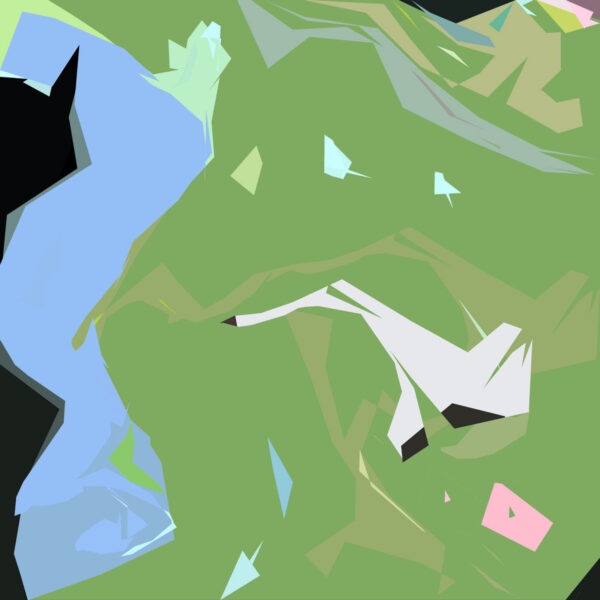 From Ice Yacht, we have Colour Buffer (SNATCH TAPES tch 222) – the third item released by Philip Sanderson under this alias, following Pole Of Cold and Pillbox. I think it’s broadly accurate to say Ice Yacht is the mode Sanderson chooses for his more “experimental” exploits, as opposed to his song-based projects or those instrumental forays where Library and film soundtrack music have played a part in influencing his imaginative forces, but even so Ice Yacht is hard to pin down, remaining somewhat unpredictable in its moves…while the first tape veered towards the islands of ambient in the slipstream of drone, the second one exhibited very artistic leanings and used a method not far removed from the French INA GRM school of the transformation of natural sounds.

Today’s record is much more in the area of “pure” electronic music, and we can validate this by referring to three very informative blogposts which the creator has provided which serve as detailed liner notes. In the first post, he discourses expertly on the matter of tape delay and its production, comparing the nuances of difference that are perceptible between the analogue method (using reel-to-reel tape recorders) and digital delay pedals. At the same time he’s able to point to benchmark recordings from both rock music and avant-garde genres that made use of such delay – Fripp and Eno’s No Pussyfooting, Terry Riley, and Pauline Oliveros. His explanations here give added piquancy to a track such as ‘Over The Horizon’, where the delay element is not only seamlessly done, it is actually forming the backbone of the rhythm, and thus an integral part of the music production – not simply an “added effect”.

His second post highlights the importance of the VCS3 synthesizer, or more accurately a simulation of same – it’s described here as “a Reaktor software emulation” of the original instrument, and it goes by the brand name of “Philthy”. With its descriptions of matrix, oscillators, and patches, this particular bit of expositions leaves me struggling to keep up, but it’s evident that Sanderson is a man in complete control of his equipment. He has used a “real” VCS3 in the late 1970s, and indeed it was an integral part of Storm Bugs work, and the irony is not lost on him that these once-affordable pieces of kit are now regarded as serious collector’s items (with price tags to match). If you can figure out the correlation between his work with the Reaktor software and the models proposed by “catastrophe theory”, you’ll be in a better position to understand the full ramifications of the title track.

While the first two tunes here are quite user-friendly and accessible – patterns, rhythms, beats, some sense of continuity – the smooth listen is disrupted by track 3, ‘Velvet Coordinates in the Park’. 9:47 minutes of strange and alienating sounds, seemingly governed by chaotic rules, leading to one of the most disquieting “outer space” moments you will hear. But let the strangeness wear off, and you’ll gain a real sense of the gravity of Sanderson’s music, showing he can produce quite serious-minded and exploratory electronic music, without any influence from the dance floor (unlike Mego or Raster-Noton projects) and studiously avoiding retro-styled pastiche. Apparently this particular track was made on a second-hand Yamaha CS-15 rescued from a junk shop, which he promptly “hacked” by using an external input to trigger the synth’s envelope and produce these unearthly sounds (using signals from a shortwave radio, about which more shortly). The track was subjected to further treatments after lying dormant for ten years, and the creator let fly with time-stretching and pitch-shifting filters to produce these very aberrant creations.

It’s in his final blog post that Sanderson expounds upon the use of SW radio, which was used to propel the first three tracks here; I’d never have known without having it pointed out. Our man goes on to discourse about the use of radio as a compositional element, again pointing to benchmark releases by Holger Czukay, Stockhausen, Kraftwerk and Coldcut; before connecting us back to his own band’s history and the Table Matters EP (1980) and his own experimental films. This is all fascinating background information, but none of it quite accounts for the grandeur of track five, disguised under the quaint title ‘Baggywrinkle’ resembling something that Caravan or Jethro Tull might have once devised, but it’s an epic 9:26 sweep of repeated and overlaid sounds somewhat in the Philip Glass or Steve Reich or John Adams mode, and indeed even resembles orchestral music with a pulsating digital brass section and busy layers of percussion. In a way I am glad not to have this piece of dense and moving music “demystified” for me; I’d be disappointed to learn if its method of production falls short of the towering majesty that these sounds convey.

While it may seem that Sanderson is keen to communicate much about the technicalities of production, especially using synthesizers, his end results are never simply exercises for their own sake; and in Colour Buffer, he has produced a memorable album of art music, with at least one certifiable stroke of compositional genius. From August 2021.