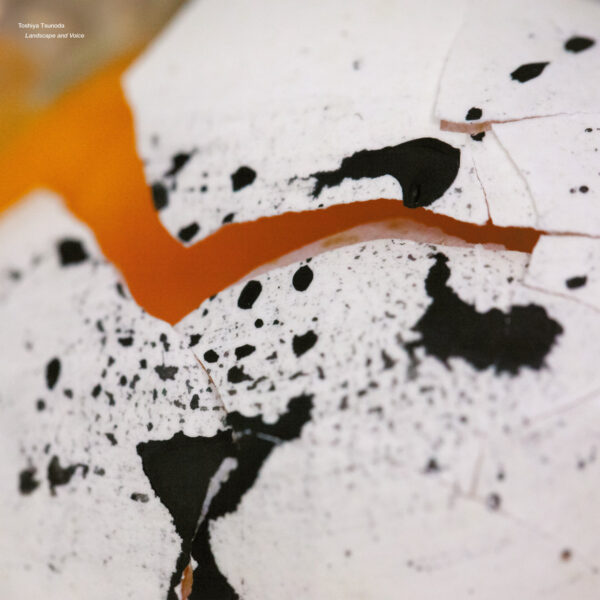 As a sound artist creating collage works of field recordings using small or contact microphones to capture sounds, Toshiya Tsunoda has produced a considerable corpus (solo and in collaboration) of releases and performances going back to the 1990s. According to the Bandcamp page for his most recent release “Landscape and Voice”, in his current work Tsunoda’s concerns include establishing a relationship with his recording environment through the sounds he collects. On the three tracks that make up “Landscape and Voice”, Tsunoda takes vowel sounds spoken by six voices (one of which belongs to Tetuzi Akiyama) and puts them over looped fragments of various field recordings taken, among other places, at a port near water and in a field. The way in which the vowel sounds are placed over different recordings is deliberate, with the field recording continuing for some time and then freezing, being zapped by fragments of human voice, and then carrying on. The interaction of the vocal glitch zaps with the field recordings and the fragments of human voice, all done in a very austere and minimalist way, brings an intriguing mystery that invites the listener to pay very close attention to all the sounds and to become fully immersed in the visions and scenes suggested by the field recordings.

The stop-start nature of the recordings, the way in which the natural background ambience can be frozen and then allowed to continue, is intended to raise the listener’s awareness that the sound environment is in constant motion. The listener is also an active participant in the sound environment: one can choose to pay attention to birds chirping in a field or to water lapping at the sides of a pier. This album becomes a sonic art gallery one can walk into and wander about leisurely.

The paradox is that the deliberate interruptions of the field recordings by periodic glitches involving human voice can bring more awareness of the dynamic nature of ambient backgrounds than listening to them, without something to anchor, filter or otherwise mediate the listening experience, might do. We come to have a relationship with the field recordings and that relationship can bring awareness and perhaps even change how we think about and engage with ambient sound.