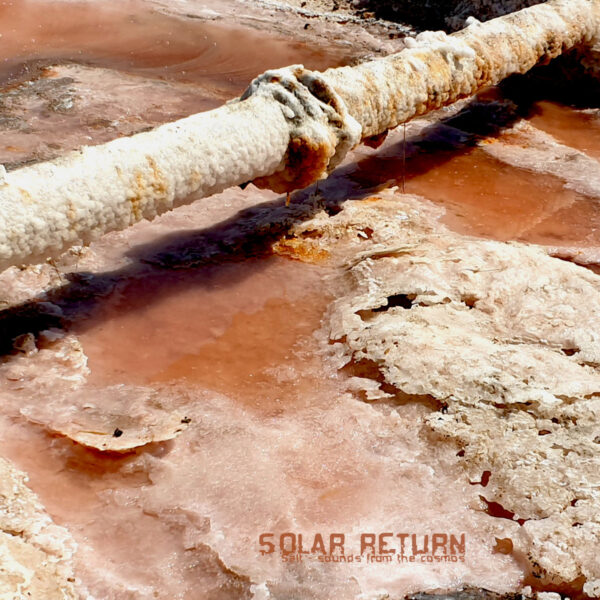 Minimal process-art thing from Solar Return – this is the team-up of French sound artists Julien Ottavi and Jenny Pickett, and the third release made under this name after the cassette Le Flaire Electrique and the 2014 CDR 2Rats&4Stars. Salt- sounds from the cosmos (FIBRR RECORDS Fibrr020) was done using very low frequency recordings – a technique I don’t completely understand, but it’s a way of picking up electro-magnetic activity in the atmosphere, if I can use such a catch-all term for the surrounding ether.

Our team know a thing or two about VLF and point out that it’s even more interesting if you take your antennas outside a densely populated urban area and take it somewhere where there’s no electrical interference, and thus stand a chance of picking up sounds from the stratosphere. This process is often called “radio astronomy”, which is a proper scientific discipline dating back to the 1930s as a means of studying the cosmos using radio waves, but Solar Return are not proposing to tell us anything about the celestial dome that hangs over us, and are mainly interested in generating sound art. I seem to recall that something similar was also done by Disinformation in the late 1990s and early 2000s, especially on the Stargate LP.

On today’s CD, Solar Return presents five examples of their craft gathered in the period 2014-2018, from parts of Denmark and France. They have titles such as ‘Day Light Solar Flares’ and ‘Cougan Exploration’, and while one of them refers to the Mediterranean sea, the recordings are not specific about where they were captured, or indeed what they represent. For the listener, we mostly just hear a lot of crackling and static, and it’s hard for us to decode what solar phenomena these unobtrusive sounds might represent. Yet it’s also strangely compelling at some level; like gathering together near a campfire, except the campfire gradually reveals itself to be spinning in outer space, and the vastness of everything starts to dawn.

The recordings are published as part of the “Open Recordings” collection on this label, and you can hear some of the collection for free, including pieces by other sound artists. There’s also a vinyl pressing on offer for this item, although it is done on demand and hence rather expensive; the CD, regular price, is mounted on an outsize piece of card. From 28th September 2021.