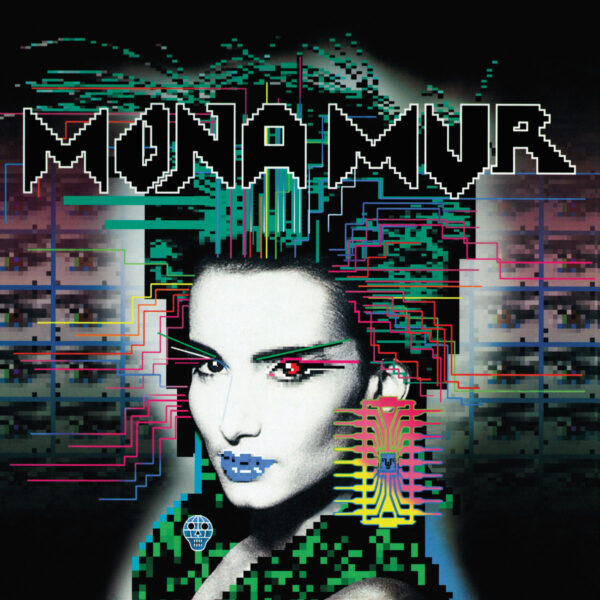 Very pleased to discover this Mona Mur (PLAY LOUD! PRODUCTIONS pl-109) album, originally from 1988 and now reissued and rejigged for CD…I never heard of this Hamburg-born singer and musician before, but I’m now interested enough to investigate further…she projects a strong and determined personality on record, and the liner notes put her in a seraglio with Lydia Lunch and Diamanda Galas, names that spring to mind when we’re talking about fiercely independent feminists with a cruel streak that effortlessly demolishes sexist males who wallow in crassness and ignorance…I’m also interested because this particular LP was made with two members of The Stranglers, one of my favourite English bands ever to be labelled with the clumsy “punk” and “New Wave” tags, and she recorded it in England with Dieter Meier from Yello co-producing. Mona’s history pre-dates this debut album though, since she started performing in 1982 just on the cusp of the NDW thing, and had a short-lived band with members of Einstürzende Neubauten performing as Mona Mur & Die Mieter. Between 1984 and 1986 there was another live touring band, but no recordings were made. This brings us to 1987 when she travelled to the UK to work with Jean-Jacques Burnel and Dave Greenfield, who did much of the playing and programming for the album – Burnel also co-produced and did the mixing. However, this process shouldn’t eclipse the fact the Mur clearly knew exactly what she wanted for this album – they worked from demos she’d already made on her Vox Continental organ, and in case you thought the package was some concoction contrived by record company executives, think again. Mona Mur wanted to play with these musicians (and her impresario Meier), she elected to travel to the UK, she knew how she wanted the songs produced, and she got her own way on every account. Her old friends from Neubaten also join the sessions for one track, Einheit on drums, Hacke on guitar…(now I start to hear some of the antecedents that led to Hackedepicciotto…)

Much to enjoy here in the songcraft, the arrangements, the programming…each song is a compacted gem of angst-strewn pop, with spare playing, taut melodies, and close attention paid to instrumental balance and mixing. Who knew that The Stranglers had it in them? I really must investigate that Euroman Cometh album… The main attraction Mona Mur has a strong and steely voice, just on the right side of being mannered, and full of constrained emotions…many of them rather angry emotions, but she hisses like a cold snake in bursts of concentrated steam rather than roaring out her rage like aforesaid divas Lunch and Diamanda. The melodies somehow match the tone and tenor of the songs, full of planned discords and jarring notes in among the attractive bright production, the jolly beats, and the pleasing chords. As well as being a great singer, Mona Mur is a story-teller, and character actor too, inhabiting the roles she creates for herself, and doing her best to convey a narrative across the length of each 3-4 minute epic. Building on this drama-cinema aspect, it’s no wonder Christina Mohr’s notes call this album “a sung film noir”. While many of the songs deal with star-crossed meetings and doomed lovers and dwell on unhealthy emotions (anger, jealousy, frustration) it would be quite wrong to suppose that Mona Mur is a man-hater wreaking revenge on the world…although, there is her version of ‘Surabaya Johnny’, a Brecht-Weill composition which I know and love from a Lotte Lenya recording. It’s a song with a heartbreaking tale of wrecked lives, the age-old story of an abused woman who still unaccountably clings to her abusive partner…where Lenya brought out the tragedy in plaintive and dramatic tones, Mona Mur seems to be aiming for something much more opaque, almost updating the story for a 1980s audience at some level. The Neubaten musicians play on this track, adding much heavy irony and bitterness. Also…award a bonus Bilgerbrau for choosing this lesser-known song from Happy End, instead of the more obvious ‘Pirate Jenny’.

For this remastered CD version, the producers have messed around with the track order slightly, but we’re compensated by getting the maxi 12-inch version of ‘Bastard’ weighing in at 6:30 mins, and four tracks from the 1982 Mona Mur & Die Mieter EP. Very nice to hear these productions with much flanged guitar, angular beats, rubbery bass and many other 1980s features which don’t show up on records much these days…plus Mona’s voice is slightly higher in the mix. She also sounds more haunted and desolate, more foreboding. Makes an interesting contrast with the much-better production of the 1988 album, but both recordings are well worth hearing. Very nice discovery – and now I want to get a vinyl original…from 6th September 2021.