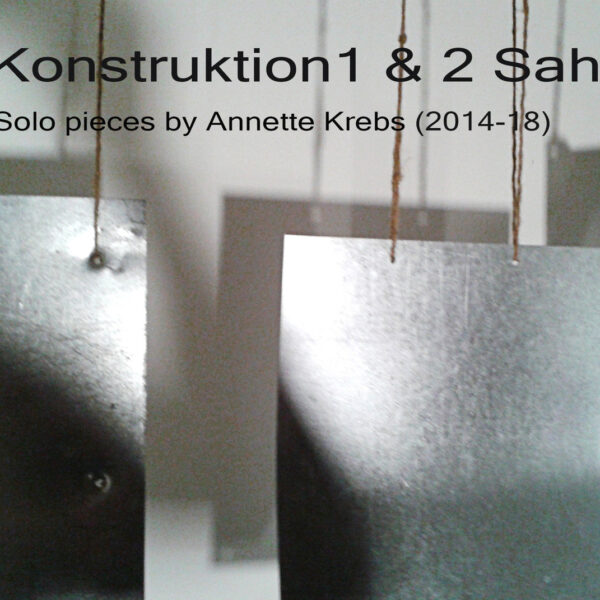 Three solo pieces by the esteemed Annette Krebs on Konstruktion 1 & 2 / Sah (GRAPHIT 01). They all feature quite elaborate and unusual set-ups, using objects and microphones along with samples and computer technology.

She’s been working on these pieces and developing them over the course of many years, and they include elements of improvisation and composition; further, she has devised “specific sonic assemblages” for each individual performance, possibly dependent on the place where they were performed. The interfaces and controllers have likewise been customised, so although she may make use of programs such as Max/MSP and TouchOSC, we’d have to assume the screen she looks at has been tailored for her needs. Of the three, I was able to find a way into ‘Sah’ which is subtitled “Three live-performed audio portraits”, and it includes speaking voices of various creative people talking, in fragments, about the creative act and what it might mean. That’s just the starting point though, as the work gets pretty intense and loopy in short order, creating a mad rush of chatter and babble as she tweaks her dials and intensifies the inputs. I like some of the results in ‘Sah’ and you can really feel how it is semi-improvised inside this loose structure; I also enjoy the distortions of the voices, the layering and multi-speedings. As “portraits” go, it might not tell us anything about the individual German and South Africa artists who contributed to it, but it does reveal a beguiling abstraction on the theme.

‘Konstruktion #1’ and ‘Konstruktion #2: Tro’ are the “metal” works, and they started life using hunks of metal with microphones involved at some point, but there are many more components in the entire array, and I wouldn’t even begin to know how to approach “playing” it. That alone is an indicator of how complex her work is becoming, I would guess. Sampled voices appear, computers and midi controllers are wielded, but mostly we appear to be hearing the sound of metal – or rather, a heavily processed and treated manifestation of same. On the second work, intriguingly, she refers to “sonic reconstructions via sound waves and spectral freezings”, indicating the radical changes she’s making to the voice of the metal, and also indicating how well she understands what her equipment is capable of. I enjoyed this second piece and started to hear it as a very strange form of theatre – the impersonal extended klang of an impassive metal piece being somehow “answered” by the Greek chorus of sampled voices. The first Konstruktion, realised a few years earlier, is I suppose cut from the same cloth although it also includes some plastic animals and bits of wood with strings attached, and although the same delicate and mysterious sounds abound, the surface is roughened up now and then with some slightly more violent groans and grinds. The occasional backward-sound of the metal (if indeed that’s what it is) is likewise unsettling. Some there be who use amplified metal sheets to create vast, immersive, near-environmental artworks, shading away from performance into installation; not here. Krebs is intimate and detailed, savouring the grain of each burnished surface of stainless steel over which she passes her questing mics.

Throughout this record, Krebs demonstrates great discipline and control over her sources – letting the sonic information leak out in tiny droplets as she sees fit, and her overall design is very hard to fathom. I think it’s because of this that the album feels cold and stiff, but oddly enough this quality works in her favour, adding more mystery to the package. That’s leaving aside the content and meaning of these pieces, which (assuming they are not simply examples of process for its own sake) is extremely difficult to decode. Yet I feel as if we’re on the verge of learning something important, if we lean in hard enough. From 16th September 2021.