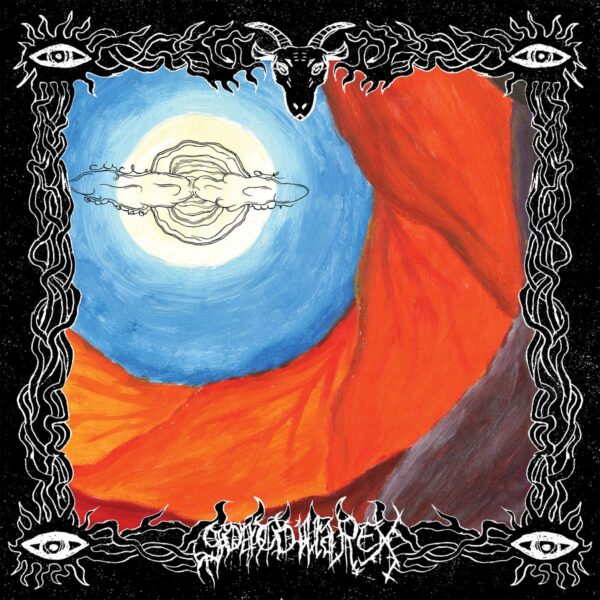 Never would I have thought, when I first heard “Shores”, the debut album from Finnish duo Circle of Ouroborus, way back some 15 years ago, that I’d still be hanging around for the band’s twentieth full-length recording. But here I am in mid-2022 with the discovery that, yes, CoO have knocked out Album No 20 – and what’s more, as is their custom, they have brought out a work with unexpected surprises and new musical directions while retaining their signature outsider sound and eclectic style. On “Aavikon Varjo” (“The Shadow of the Desert”), the duo’s musical journey travels from noisy yet melodic atmospheric black metal, with touches of shoegaze at once melancholy yet dreamy and blissful, to darker, more terrifying territories of Gothic darkwave and dungeon synth. While this album is not long (just over 30 minutes in length), it features many short tracks, some of them not even making two minutes, and only one “Puutaiva” exceeding the four-minute mark.

On Side 1 of the vinyl LP release, the first nine tracks may pass by listeners in a blur: several don’t amount to much more than layers of droning guitar noise in which the barest melody can just be noted, and over which Antti Klemi’s familiar vocal (that always seems to come from another, more dream-like dimension) does battle with a phantom BM vocal covered over in reverb and which might also come from the same world that Klemi’s clean-toned voice dwells in – albeit from its more Hades-like realms. Some of the melodies can be hit-and-miss here but the more memorable ones pop out in tracks like “Jäähuurre” and the dark-pop “Poltetut Kartat” (“Burnt Maps”). After every couple of tracks, we are treated to a series of short spoken-voice pieces under the collective “Tahdon” (“I want to …”) title with acoustic guitar accompaniment. These tracks culminate in “Maailma Unessa” (“The world in a dream”), a mid-paced melodic atmo-BM song combining a driving rhythm and corrosive guitar noise-wash that end in mournful synth wash ambience.

The last five tracks (Side 2 on the LP) are where CoO really go out on a musical limb, venturing deep into severe and forbidding darkwave synth ambient. The church bells and doomy dark orchestral ambience of “Puutaiva”, with its hint of limitless cavern depths, bring the band close to an apocalyptic precipice, beyond which there is endless dark space where unseen beings roam. Lyrics are spoken in the style of a judgemental god with the power to elevate some privileged souls and damn the rest to eternal fire and pain. “Antautuminen” (“Surrender”) may be a brief return to noisy atmospheric BM, though the duelling vocals are now merging into one another. The album closes in a place far removed from the various levels of darkness – one gritty and noisy, another death-like, still another on the edge of yet another universe – that appears very heavenly though in a detached and chilly way.

A narrative of transformation that may involve temptation, downfall, judgement and redemption, or a confrontation with one’s demons (inner or outer) with an outcome that seems definitive and complete but which might contain the seed of another, future conflict, is noted. “Aavikon Varjo” presents as a concept album of lightness and darkness in conflict, which explains what may appear to listeners as a work of uneven music where two distinct genres bunch up at opposed ends with very little overlap or compromise. As all the lyrics are in Finnish, and the lyrics are important in helping to bridge individual tracks and the two musical sides of “Aavikon Varjo”, I would think Finnish-language audiences will get more out of this album than the rest of us can. Even so, just concentrating on the music and seeing how it effortlessly transforms from gritty dark urban blackened noise rock / pop into Gothic darkwave, epic blackened rock opera and trance ambience, all the while playing out in the familiar Circle of Ouroborus universe so it is still accessible to long-time and even more recent fans who might only know CoO’s last few albums before “Aavikon Varjo”, is its own reward. Whatever genre the musicians turn to for inspiration, they use it for maximum effect for their purposes and rarely misfire. My only wish though is for the songs to be longer and for some of them also a bit more developed in their ideas and structures to allow listeners to savour the music and atmospheres more..

I have a feeling that “Aavikon Varjo” will be at least a minor classic in CoO’s body of work as a concept album delving into dark ambient, darkwave and dungeon synth much further than I would have thought possible for this duo to do. Once again the CoO musicians show there’s plenty of life, energy and imagination in their project – and they show no signs of slowing down or running out of juice. Bring on Album No 21!