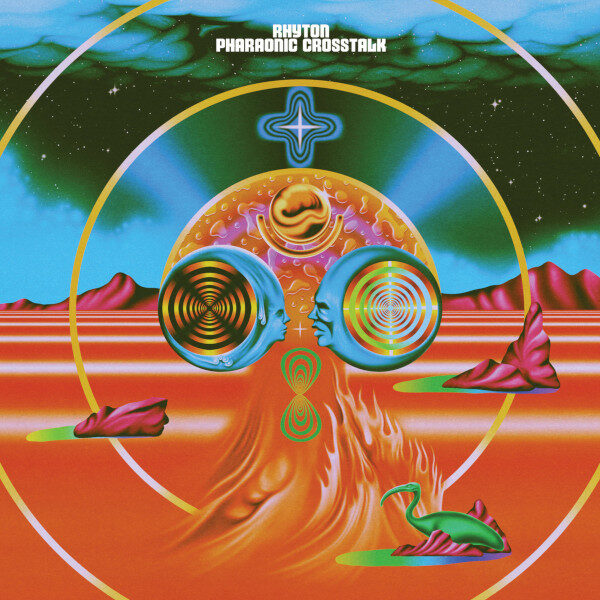 From New York City, rock trio Rhyton have their LP Pharaonic Crosstalk (FEEDING TUBE RECORDS FTR535) presented in a very fine Robert Beatty cover. This painting replete with 1970s cosmic vibes, stopping just short of an Alice Coltrane cover, may lead you to expect a certain “universal consciousness” feeling from the music herein, which turns out to be surprisingly approachable melodic rock.

Lead singer and guitarist is David Shuford, who also plays a mean mandolin, joined by drummer Rob Smith and bass from Jimy Seitang, who also contributes keyboards. They seem to favour instrumentals, sometimes quite discursive at that, which is fine by me as Shuford’s mannered baritone growl of a vocal somewhat sours the milk in the churn for this listener. From the opening track ‘Stanley Stood Still’ I thought we might be in for a Grateful Dead tribute band, so accurately and knowingly do these clever New Yorkers emulate the country-inflected riffs of Garcia and Weir, but by the time of ‘Croz’ which ends side A we’re starting to drift into “spacerock” territory with the meandering melodies and infinite horizons suggested by these ingeniously interlaced guitar lines. Although it’s tempting to imagine a double LP of side-long pieces by this band, they fare better with short tracks and compacted ideas; then again, we have the 11-minute ‘Runnings (Out Of Dreams)’ which locks into an impressive syncopated groove for its second half, though Al Carlson’s irritating soprano sax doodlings don’t add very much to the collective effort. ‘Kabylian Peaks’ which closes the album is another highlight, showing how Seitang’s understated synth drones can really help to underpin the guitar escapades.

I see Rhyton have been active since 2011 and had a few releases for Thrill Jockey, even so arriving a little too late to ride the short-lived spacerock craze that was surfed by Magnog in the 1990s. Pleasant and melodic music, and expertly performed, if not especially challenging; I’d love to hear the band inject a shade more of the unknown into their journeys, aim for an all-out intergalactic odyssey of several lightyears, instead of these pleasure-jaunts to the Moon and back. From 30/06/2021.