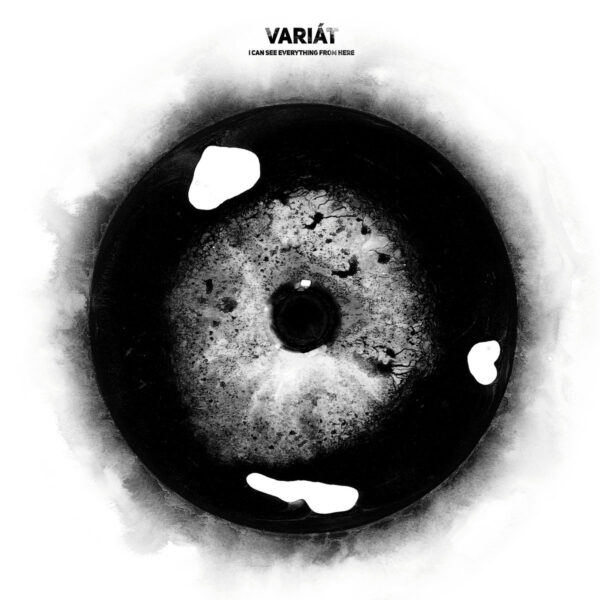 Dmytro Fedorenko here under a new alias Variát, with his album I Can See Everything From Here (PROSTIR +3), a particularly grisly slab of juicy noise made with guitars and electronics.

Ukranian genius Fedorenko, working in tandem with Zavoloka, used to run the Kvitnu label in his country (and then in Austria for a time), putting out many tasty examples of avant-techno and extreme noisy electronica which even an old lunk like me could appreciate, often reaching for adjectives like “muscular” or “very muscular” to describe their pulsing sinews…I think I’m right in saying that the Kvitnu imprint may now be defunct, but Variát is very much an encouraging “new direction” for this stern creator to be taking with his art, and I use the word “stern” considering I always imagine him as a frowning, serious type, half-intent on laying waste to civilisation with his austere blasts.

One significant departure here has been for him to pick up guitars, not only adding a rockist streak to his outpourings, but causing much of Everything From Here to resemble an advanced form of stoner doom metal, albeit a new strain that’s been poisoned with synth-maladies and infected with digital sickness in its veins. The record twists and turns in and out of metal genres and back to electronic music with the slickness of a mutating cobra…one admires the primitive manner in which our man swipes and hammers his trusty “axe”, an instrument which in my fantasy world is made from bright silver metallic alloys, and can only be touched by its owner (all intruders receive a lethal electric jolt). Fedorenko’s main plan has been to go back to “fundamentals” in the recording studio, and he describes with relish his array of metal percussion, his broken amplifiers, his use of hammers to batter the drums, electric drills on cymbals…in fine all the industrial mayhem promised by Neubaten in 1982 has been rethought for the 21st century and served up in a claustrophobic wodge of powerful hateful noise. There’s also talk of multiple overdubs and layerings which the creator likens to musique concrète, and also proudly tweaking his synths in an extensive process to bring him out of the other side of synthesis, until the Korg sounds like a violin again.

So much for the studio technique, a melange of distortion and forbidden methods whose very unorthodoxy strikes terror into the hearts of any strait-laced recording engineer who faints every time a needle bounces into the red. The net result is an album of remorseless hate, gloom, despair, and anger, these basic pessimistic emotions expressed and given free rein by Variát’s “future-primitivist” approach, a Neanderthal man in the studio deconstructing the gleam of digital sound, the better to limn his “sound world of austere urban psychedelia”. Watercolour painting on cover by Zavoloka; the record is pressed in clear chalk and marbled black / transparent vinyl editions. A must! (24/09/2021)