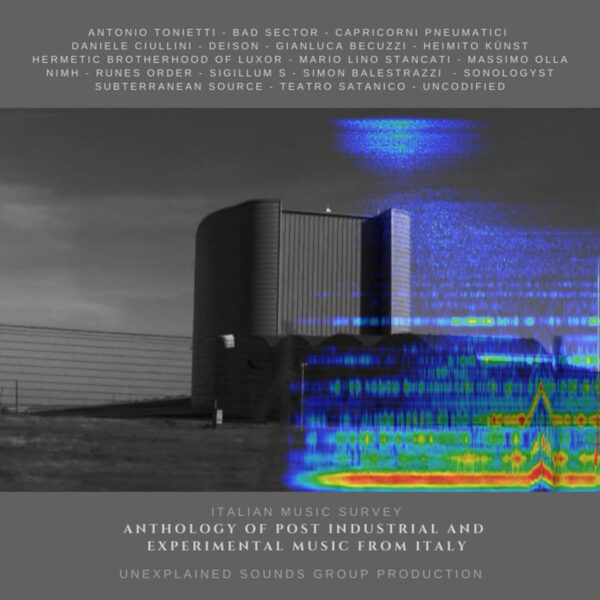 It would be most unusual (to me anyway) if among his various adventures exploring and documenting the experimental underground music scenes in different countries, USG’s Raffaelle Pezzella didn’t include a survey of his native Italy’s experimental music. Italy has long had a very distinct experimental scene that has drawn on local Italian inspirations not often familiar or available to equivalent scenes in other countries; one thinks of, let’s say, Ennio Morricone whose long career included 16 years of involvement with the avant-garde improv collective Gruppo di Improvvisazione Nuova Consonanza. On this compilation, Pezzella sets his sights on the experimental and post-industrial music scene in Italy which, since the 1970s, has been inspired more by avant-garde and experimental music developments in Europe and less from industrial / post-industrial music forms derived from Anglophone rock bands (according to notes appended to the Bandcamp page for this compilation by one of its contributors, Gianluca Becuzzi, anyway). Accordingly then, the sounds heard on this album might perhaps appear a bit more refined, even a little remote at times, and less confrontational for the sake of being shocking and confronting, than we might have expected from a compilation of experimental and “post-industrial” music.

By and large, the music featured on this album often leans more towards ambient, especially dark ambient, than to industrial, and much of it sounds like instrumental cinematic soundtrack music for dystopian science fiction films. All tracks are quite short and many of them can seem like snapshots of longer works. Early tracks pass very smoothly, building up an impression of a tapestry of melodic instrumental music played on synths with found sound recordings inserted here and there. The first track to break out of this mould is Daniele Ciullini’s “Decoys” which uses recorded conversations, noise effects and static over a galloping buzz. Gianluca Becuzzi’s “The Ancestral” is a welcome piece of buzzing drone guitar over which are laid slow lead guitar feedback melodies and various percussion instruments.

We then pass through a couple of tracks with some noisy distortion from NIMH and Heimito Kunst and plough through more pieces of dark ambient and a couple of improv pieces on live acoustic instruments from Simon Balestrazzi and Massimo Olla. At last shaking up the compilation after 14 tracks, Teatro Satanico offers the digital equivalent of thousands of tiny angels bopping up and down on a teeny-weeny pin while a strange shimmery ambience and some bumpy things pass by. UNCODIFIED’s “The Presence” is the jerky but mostly sullen harsh noise electronics black sheep track that upsets the otherwise smooth-rolling procession of music on this compilation. Bringing up the rear is none other than Pezzella himself as Sonolygist with a quiet meditation of quivery droning tones and electronics against a radiant cosmic-space ambience.

There are some very interesting, even beautiful and gorgeous pieces here, though they can be frustratingly short and don’t allow for much listener immersion in their sound worlds. The tracks I singled out above stand out from the rest of the compilation which, to be honest, I didn’t think seemed all that “post-industrial” in sound, apart from the processes involved in their creation and their general dark atmosphere. Nevertheless the album is worth hearing out at least once as a document of contemporary experimental music in Italy even though the selections do tend to sound more similar than I would have expected from 18 artists.