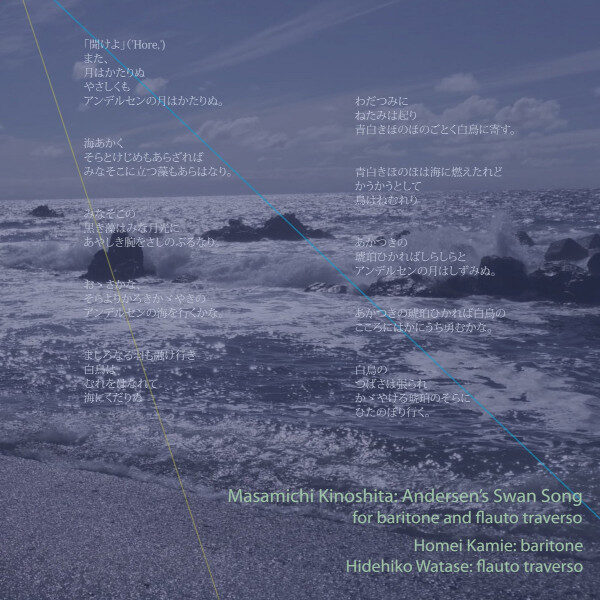 Andersen’s Swan Song (ftarricl-665) is a single piece composed by Masamichi Kinoshita and scored for the flauto traverso (played by Homei Kamie) and a baritone vocalist (Hidehiko Watase); it’s pretty stark with its simplicity, and the vocalist doesn’t even begin until about halfway through the piece, a work which up to then is dominated by the forlorn tones of this shrill flute. This 2011 piece includes lyrics by Kenjo Miyazawa, a notable novelist and poet who died in 1933. I think some of his work has been adapted into anime films, and may have found an audience which he didn’t gain during his own lifetime. The particular poem on which the music is based was written by the poet and based on the works of Hans Christian Andersen; apparently the lines depict a scene of typical Zen simplicity, as a swan who is tired of flying settles on the ocean at night, then resumes flying when the sun comes up. The entire story is told from the point of view of the moon.

Right there we have a lot of imagery which, in my vulgar, Westernised, superficial way, I would associate with Japanese culture – the ocean, birds, the sun, and the moon. We also have a certain amount of sadness and forlorn emotion, qualities which are very much to be found on this bare-bones composition and its austere recording. Even though the lyrics are in Japanese, and some of the culture may be alien to us, something about Kinoshita’s work strikes very deep. Interestingly, it began life as a commission mainly to showcase the flauto traverso, and was part of a concert with some quite specific conditions attached for its realisation; including for instance that it had to feature a baritone vocalist, and be as long as possible. The composer really got into the task, investigating the particular sonic properties of the instrument, and scoring for it in a very nuanced and attentive manner. The addition of the poem only came a bit later, when he was musing about an “oceanic” theme for the work, and he chanced across the Kenjo Miyazawa text. In incorporating it, he dutifully gave due consideration to the “intertwining of sound and words”, to produce a fully integrated composition; his efforts have paid off in the finished result.

If he was indeed aiming to create something a little other-worldly, an idealised ocean vision of “a place seldom seen” where “repose and anxiety” are combined, he has succeeded 100%. 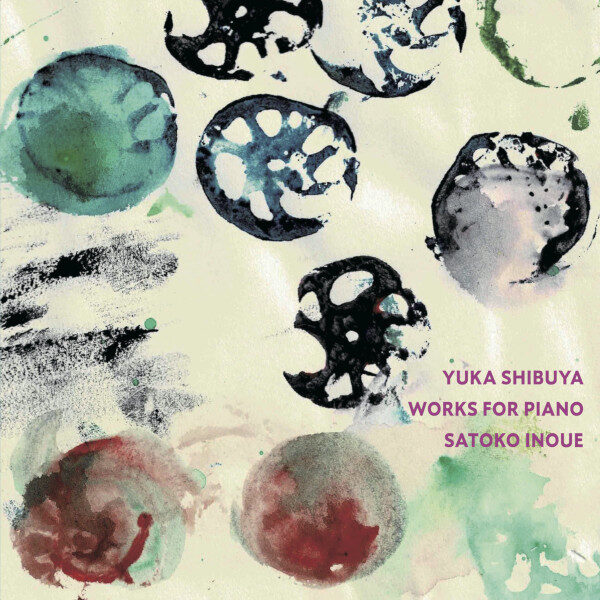 Yuka Shibuya is a micro-tonal composer and studied at Tokyo University of the Arts; it so happens she is also a fan of Satako Inoue’s piano playing, and has admired her work on the keys since around 2007 when she first went to one of her concerts. In a way Works For Piano represents and expresses the mutual respect between the two, and the album is a successful integration of talents; indeed, two of the pieces here were composed directly after the meeting, and were premiered by Inoue. The music here is very accessible, which isn’t to deny the compositional rigour of this most ingenious and understated modernist; there is more than a hint of Satie on offer too, explicitly so on ‘Containing Time’ which is intended as a Satie homage, which may serve as another way in for many listeners. Plus there are hints of poetry and landscape-painting in the titles and their movements, not too far apart from Masamichi Kinoshita above.

Yuka Shibuya concisely describes her compositional methods in the insert; she refers to chance methods (throwing dice) in two instances, while another one pays special attention to the piano pedals and the use of rests. One piece uses an “inverted metrical structure”. The long work ‘Clouds Merging Into The Sea, Islands Floating in the Sky 2’ has been adapted from its original form, which was a quartet involving traditional Japanese instruments; what we hear on the disc is a rewritten version of the piano part, as a solo piece. Beyond these methods though, the underlying theme and fascination for the composer is something elusive and almost philosophical; it’s about “the moment when sound vanishes”. As she muses on this particular notion, it’s evident that she has found many ways to try and express it through the dying notes of a piano, and it leads her to ruminating on the very idea of the flow of time itself.

This seems to me a very intuitive and innovative approach to the matter of “duration”, something which I think has preoccupied many male modernist composers throughout the 20th century; many of them tended to regard it as a problem to be overcome, while Shibuya evidently sees it as an opportunity. Very high recommendation for this gorgeous collection of delicate and beautiful music.