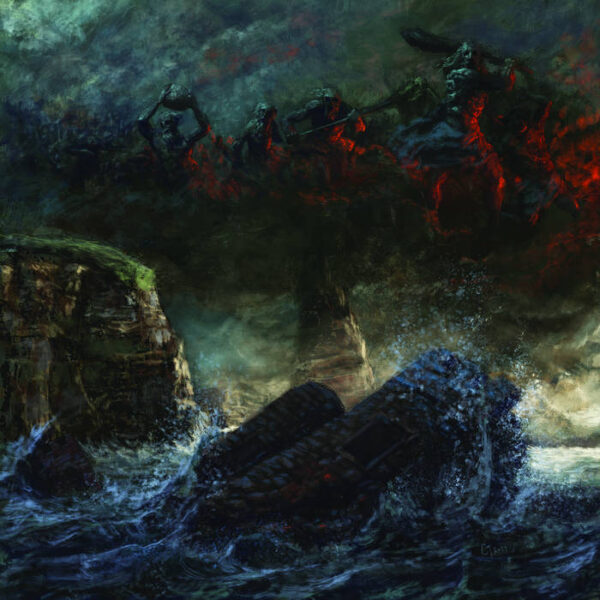 A gloriously messy recording of non-stop destruction and chaos, complete with never-ending cries of pain and agony, this album with the rather dry title of “Nahanagan Stadial” happens to be the debut full-length of Irish black / death / war metal quartet Coscradh. The album’s title refers to a prehistoric climatic event (usually known as the Younger Dryas but known in Ireland as the Nahanagan Stadial) of some 11,000 – 13,000 years ago when the climate over North America and Europe bordering the North Atlantic suddenly became cold, leading to temperatures dropping by several degrees and glaciers advancing in these regions again after a period of gradual warming. That a young-ish band – Coscradh (Old Irish for “massacre”) formed in 2015 but some of its members have rap sheets in underground metal going back nearly 20 years – sets out with a debut album boasting such a title, itself a herald of a new age of catastrophe and confusion, destruction and death, says something about the band’s view of recent events such as the COVID-19 pandemic, and the lockdowns and restrictions that followed, and what the musicians may think is likely to follow.

Appropriately the album opens with the title track which transforms from a slow, almost doomy noise-guitar ambient instrumental into a blackened death metal melodic piece with a near-hysterical lead guitar solo. Chaos quickly follows with a mix of ghost voices, all soaked in reverb, roaring, groaning or screaming as the meteor or asteroid that might have caused the Younger Dryas event hits the planet and mass destruction and death follow, with chaos coming not long after. Whatever civilisations existed on Earth prior to the event are destroyed and those lucky – or unlucky – to survive the initial impact now have to face more catastrophe in the form of nuclear winters and a new Ice Age.

After the title track, as you can imagine, the Grandmother of all Hells breaks loose as worldwide destruction in the aftermath of the asteroid / meteor crash follows in “Feast of the Epiphany”, a truly apocalyptic vision of chaos and total collapse as skies are aflame, ecosystems crash, civilisations fall and what remains of humanity is reduced to primitive savagery and warfare. We move from “Feast …” to “Plagues of Knowth” with barely much change in the music, both tracks being more or less near continuous blurs of noisy music and duelling sets of monster vocals, highlighted by crazed lead guitar solos, and the main differences between the two tracks being in the lyrical content.

The last couple of tracks (tracks 4 and 5) on the album have Gaelic-language titles and lyrics, and are a bit more blackened death in style and music, with a bit more order. Riffs and melodies are a bit clearer, now that some of the dust has passed with the middle tracks, though the monster voices continue with their interminable squabbles while those hapless victims they accidentally trampled on howl in wretched pain. Of these two tracks, “Feallaire Dóite” is stronger with even more clearly defined riffs and the whirling-grit noise dialled down a notch. The monster voices continue to do battle while someone screams for medical help that will never arrive (all hospitals, clinics and the entire medical and nursing professions having perished way back in track one) and the music goes insane with squealing guitars and percussion all going totally amok.

If you don’t care too much for songs with their own musical identities but are keen to dunk your head in complete blackened death / war metal chaos immersion, this album will suit you perfectly: it’s nearly wall-to-wall chaos and destruction, with all the horrific consequences of collapse and the despair that goes with them piled on in one track after another. For those who want actual songs with clear riffs and rhythm structures, laying out a distinct narrative from when the asteroid / meteor hits to the destruction, then ecological collapse and global nuclear-style winter, with just a hint of warming and perhaps revival, you may be disappointed. The noisy, bleached-out guitar presentation does tend to blur out the riffing and tremolo guitar melodies, and makes the songs sound more similar (and thus more monotonous) than they might actually be. The more experimental ambient side of Coscradh surfaces in codas attached to the songs when this aspect of the band’s music should be better integrated into the core black / death style; this integration would have helped give the music as a whole the depth it needs, instead of it sounding a bit one-dimensional.

At least, in spite of the song-writing going haywire and the music coming close to emulating the complete collapse that inspires it, the Coscradh men sound as though they had loads of fun making this album. The singing comes close to cartoony and dare I say the guys probably go overboard on the guttural monster fights and the plaintive victim cries. But this album, even with all the flaws it has in the song-writing and the production, is a much more fun affair than listening to works with perhaps more technically polished song-writing and the music carefully put together, but without passion and exuberance.

One day Coscradh will figure out the formula for bringing all their musical assets together in tight (but not too tight) songs and they will produce the album that reviewers and fans alike will love. “Nahanagan Stadial” sounds very much like the work of a band high on energy and raring to go after years of confinement and restrictions, but now needing a path on which that energy can be directed. For the time being, let’s treasure bands like Coscradh for bringing a bit of joy and gleefully gratuitous blood and gore back into our lives.