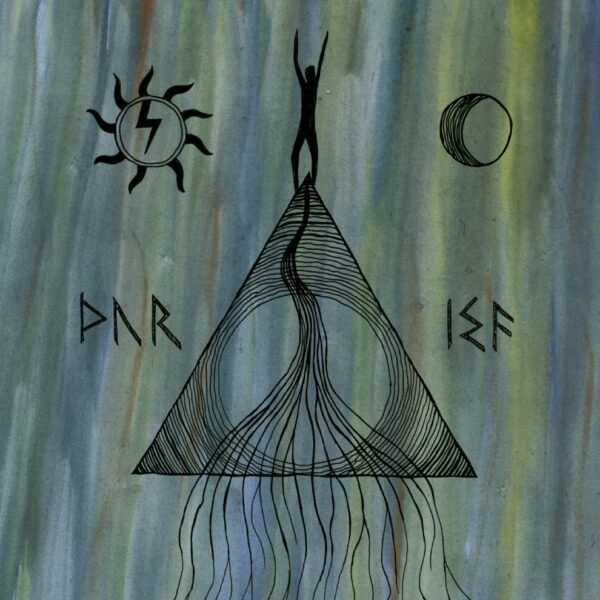 Astonishingly for a band that formed way, way back in 2004 and has retained the same personnel (Atvar on all instruments, Antti Klemi on vocals and lyrics) since 2006, Finnish duo Circle of Ouroborus show no sign of decline: if anything, in releasing three albums all very different from one another in 2022, these men are delivering some of their most adventurous and varied work yet. “Aavikon Varjo”, released in May 2022, shows a noisy CoO going into darkwave / dungeon synth direction; “Auatala”, released in early September 2022, sees CoO in a blackened post-punk mood that follows on from earlier 2021 release “Viimeinen Juoksu”; and third 2022 album release “Thurisa”, coming out together with “Auatala”, brings out a trance-like dark ambient / blackened pop rock CoO reminiscent of their 2012 album “The Lost Entrance of the Just”.

The songs on this album, all written and sung in English (which Klemi actually hasn’t done for CoO for 10 years; it’s possible that the songs on “Thurisa” had been written and recorded that long ago), have a dream-like yet mysterious, even slightly ominous ambience as they sail serenely through your head. Soft drumming, a generally slow pace, the use of droning keyboards (which include organ and piano on some tracks) along with guitars and a production that softens the music’s edge with dark reverb and a jazzy feel are the dominant characteristics of the album. Klemi’s clean-toned singing sounds as if he is far back in the distance, out on a rock on his own, almost cut off from the music by the dark spaces. The singer certainly comes across as the stereotypical prophet come to town to warn of impending doom, only to be scorned and mocked, and eventually run out into the desert wilderness where, in near madness, he still wails and cries. Though the melodies and riffs are not particularly distinct or memorable, their languid delivery and gentle, clean tones even when Klemi’s singing is at its most feral and savage (as on “Revolution Radiating”) are hypnotic.

The entire album seems very much like a soundtrack for a moody, atmospheric film of post-industrial / post-urban landscapes, of grey empty streets and dilapidated buildings where crimes have long gone unsolved and whose victims cry out (whether in real life or on some other plane of existence inaccessible to us) in hopeless desperation for justice. It is a film set in a time far from summer and close to winter where individuals struggle to find meaning and purpose in their lives. At the same time, despite its real-life dreariness, the world in this film sits near another, strange and unearthly realm and the barrier between the two is thin and permeable. While the tracks on “Thurisa” may not seem particularly outstanding as individual pieces, put together they create a clear and definite sonic universe where the fantastic, the mysterious and the otherworldly penetrate a grim reality and give it hope, a rare radiant beauty and a vision worth striving and dying for.

This particular dark ambient / blackened dream pop rock strand of CoO’s music may not necessarily be the duo’s current direction but it certainly is a very haunting and otherworldly record that underlines the band’s reputation for quirky BM experimentation. The more you listen to it, the more its dark layers and Klemi’s cries grow on you.