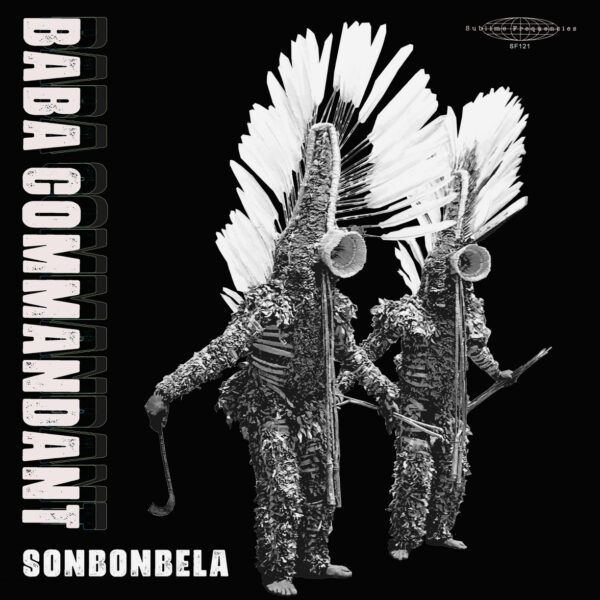 An infectiously joyous album with a light touch, “Sonbonbela” is the third album by Bourkina Fasso band Baba Commandant and the Mandingo Band for the Sublime Frequencies label. At the time of this review, the album was set for a vinyl release in October 2022. Led by singer / main song-writer Mamadou Sanou, the Baba Commandant, and his trusty doso n’goni (a stringed instrument), the five-piece band ignite a dancefloor storm with seven songs of toe-tapping beats, rollicking percussion and pointillist psychedelic guitar solos that soar through the skies. If they wanted to, these guys could sail through the heavens forever buoyed up by extended improvised breakouts featuring guitarist Issouf Diabate’s light-fingered soloing backed by the solid rhythm section of Wendeya J J Ouedrago and Cheick Abbas Kabore but instead they go for a more minimalist approach with medium-long songs averaging about 4 – 5 minutes in length, all of them tight numbers packed with crisp drumming, spacey guitarwork and Sanou’s tough-edged vocals.

Each song on the album boasts trancey, slightly blues-tinged atmospheres and Diabate’s cosmic guitar sounds, and a couple like “Kameleba” and “Afro Mandingo” also feature some spiky, near Middle Eastern / Oriental tones that might have been marinating for hundreds of years in some remote cave or underground cavern beneath the Sahel scrublands. It’s hard to pick a stand-out track as there is hardly a moment wasted in each and every song – but just for its twangy tones and an acid-psychedelic / faux electronic middle instrumental passage, “Kameleba” wins out over the rest. A couple of later tracks “Serejugu” and the title track sound a little as though the musicians are taking things easy and simply enjoying playing together for the sheer fun of it, rather than trying to blast people off the dancefloor.

Eventually all good things have to end and the musicians must return to Earth but for about 35 minutes you’re sent into a wonderfully trancey heaven by a cosmic Afro-beat soundtrack.