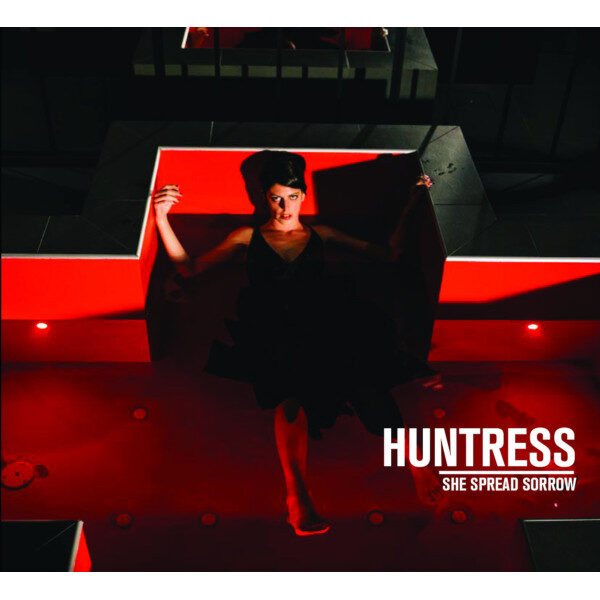 Huntress (COLD SPRING RECORDS CSR282CD) is the fourth album from She Spread Sorrow, the Italian solo act of industrial death electronics Alice Kundalini. For reasons I can’t understand myself, I have a lot of affection for her chilling and unsettling episodes of terror, possibly because she’s one of the few women doing it and this fact alone has sent me on a quest to hear the music of other solo women immersing their minds and bodies in the dark zones, such as Himukalt, Puce Mary, and Pharmakon.

We have interpreted previous She Spread Sorrow records as some sort of inverted Catholic confessional rite (no doubt taking cues from the press release) with their whispered vocals and steady meditational dark drones lulling us into an unwelcome state of mind as we confront hidden terrors. Today’s item isn’t far apart from that mode, but it also elects to tell a story (the huntress has a psychotic relationship with Blue, the very prey she’s trying to track down) and it’s based on nightmares, always a popular trope with this listener who laps up any record which purports to be inspired by dreams or sleepless nights. Kundalini’s personal dreams and night sweats have fed directly into this release, and as an earnest of how seriously she takes her work, there was apparently a three-year creation period involved in the realisation of this obsessive vision, which may or may not contain hints of forbidden love and transgression. Cover artworks on the six-panel digipak show our heroine immersed in a cross-shaped pool which might even be the baptismal font inside a modern church, but the walls of the pool are painted a deep red, the colour of blood, an image which runs deeply throughout the intoned verses of Huntress.

Listen to the end to discover the outcome of this fevered story, one which could be read as a pessimistic, ambiguous update on ‘the hunter gets captured by the game’ theme. (01/11/2021)