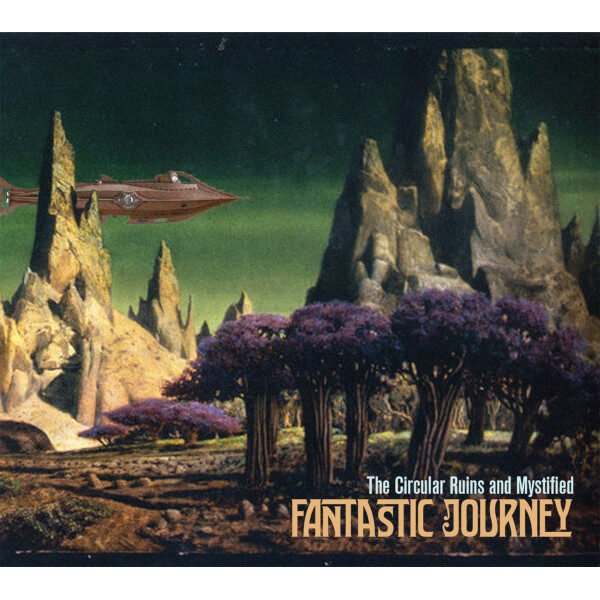 The Circular Ruins is a solo act by Anthony Paul Kerby, who also records as Lammergeyer, The Winterhouse and Nunc Stans. He also runs the DataObscura label, which originally put out Fantastic Journey (COLD SPRING RECORDS CSR298CD) in 2013; it’s a team up with Mystified, i.e. Thomas Park. Today’s reissue adds ten minutes of bonus material and uses a slight variation on the original artwork, which was taken from a book by James Gurney.

In visuals and music the release is explicitly referencing science fiction, albeit fiction from its earliest inventors – Jules Verne, H.G. Wells, and Edgar Rice Burroughs, and most of the track titles are named for classic works by these pioneers – except for Track 4, ‘Forbidden Planet’, which as far as I know refers to the Hollywood production based loosely on Shakespeare’s The Tempest. The “outer space” trope has been a feature of electronic and experimental music for a long time, and it’s often an associative and interpretative theme that is pasted onto the music even when its composers didn’t intend it; in this case, both The Circular Ruins and Mystified not only have the intention, but they also welcome the idea of telling stories in sound and hope to stimulate the imagination of the listener with these visions of the future and mysterious unexplored worlds.

I just keep wishing they would come up with something more surprising, more exciting, more alien, than these rather ordinary and pedestrian ambient strolls; they don’t seem particularly amazed or flabbergasted by the wonders of the world of tomorrow, and instead they’re already as blasé as the scientist in 2001: A Space Odyssey who’s made so many trips into outer space he doesn’t even bother to look at the Moon. More simply, Fantastic Tales just isn’t fantastic enough. However, we can’t ignore the craft and skill that’s in evidence on these highly-polished and layered works, and the subtlety and care with which they perform their assigned tasks – Mystified does the “backgrounds”, and The Circular Ruins does “the foreground” they tell us, as if they too were producing a detailed painting for a sci-fi paperback. (01/11/2021)