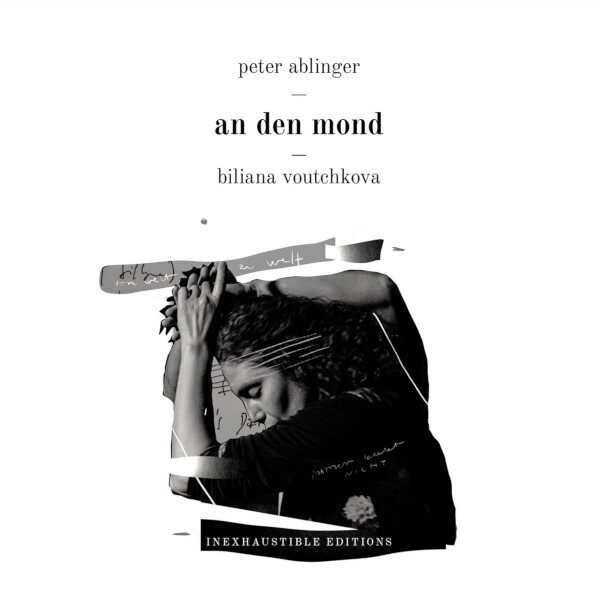 Excellent record an den mond (INEXHAUSTIBLE EDITIONS ie-045) from the team-up of German composer Peter Ablinger and the violinist Biliana Voutchkova. Two long works on the disc, an old one and a new one; the earlier piece dates from 2012, and is called ‘augmented study’, scored for 7 violins. This is evidence of the long-standing relation between these two musicians, and when the producer/label boss Laszlo Juhasz expressed an interest in releasing something by the pair, this particular recording was proposed for the project.

Can’t find much information about ‘augmented study’; of the two, I suppose you could say it’s slightly more conventional as a structured composition, although the structure is probably quite simple and the finished results are about as intense as a dose of Venusian mind-therapy, involving many invasive chemical treatments for the brain. I’ll have to assume Voutchkova overdubbed seven separate violin parts to produce this slowly-tightening, escalating coil of music; the strings rise in ever-more nerve-jangling tones, forming a deeply unsettling mixed chord which probably contains just about every “forbidden” configuration that’s known to music composition, from 12-tone serialism, tone rows, and the notorious “Diabolus” tritone. There’s a real purity and single-mindedness to ‘augmented study’ that makes it an “instant classic” of modernism, and you can sense how it connects to Ablinger’s ongoing enquiry into duration and space in music. Few performers would have the focus required to pull this off, I suspect, but Biliana Voutchkova is just the person for the job.

‘An den mond’ is quite a different passle of clonks…recorded in 2021, it’s a more recent piece and still fresh in the minds of the creators, who each report on it with their own perspectives. Albinger is dry and factual about it, summarising the intention and method in just four terse lines, but Voutchkova has a vivid diary recollection of the circumstances of its creation, inevitably linking it to the Covid pandemic and her own (unrelated) illness at the time, but this is entirely fitting as the piece is intended as “magic spells for a healthier life”. That’s right; Ablinger has written 16 short incantations for the voice and the violin, partly improvised, partly intuitive, done collaboratively, and the whole process seems to have included an element of game-play. Taken together, we can hope that these 24 minutes of short fragments can do a lot to dispel the cloud of plague from our beleaguered globe, perhaps in the vein of William Burroughs and some of his tape-recorded experiments that were intended as modern-day witchcraft, a practical means of reversing a curse. Musically, the results are both unearthly and beautiful, calmly emanating an uncanny charm with their weird discords and strange vocal sounds. Voutchkova deploys many voice methods, including an eerie wail, massed harmonies, and a spitting tone that makes her sound like a woman possessed. An extremely unusual and powerful work. From 9th November 2021.