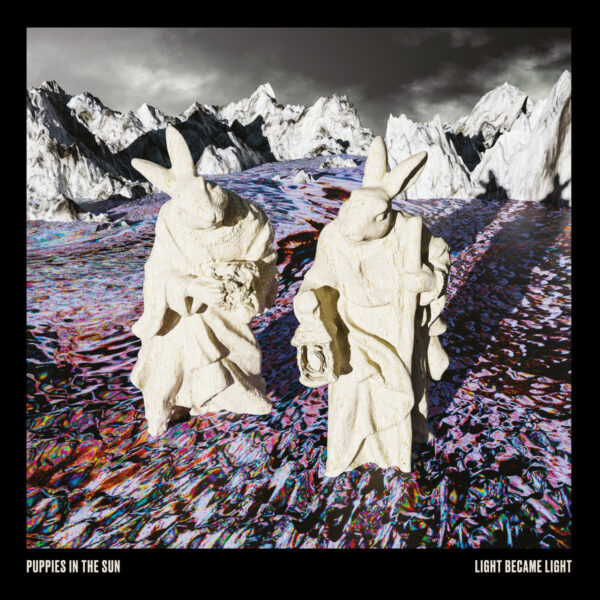 Founded by two musicians who were childhood friends in Peru and later going their separate ways as adults when they accidentally met again in Barcelona and from there decided to work together, Puppies in the Sun is similarly dedicated to improvisation, exploration, spontaneity and (of course!) happy accidents that come as a result of the duo’s musical adventures. Keyboardist / electronics man Alberto Cendra and drummer Cristóbal Pereira will be our guides on this, their debut album “Light Became Light” as Puppies in the Sun.

The two musicians present as a noisy rock band with a gritty style dominated by soaring synth ambience and melodies, and strong steady drumming. The catch of course is that there are no guitars or bass guitars … but rather than being restricted by the lack of strings, Cendra and Pereira are free to proceed wherever they like without having to rely on guitar riffs or feedback to define or anchor what they do. The result is gorgeous and spacious yet tough cosmic psychedelic rock that spans infinite distances and dimensions from one extreme of the universe to another … and another. There is a definite jazzy edge to the music due to the emphasis on improvisation but the whole recording, whether you hear it as one continuous soundscape (the recommended option) or split up into its seven tracks of very unequal lengths (there are two very long pieces and five much shorter ones), is a tremendous mind-expanding experience, coming as it does from just two musicians working with a limited set of instruments.

In spite of the lack of guitars, the music does have a slightly noisy, grainy edge which, together with the crisp drumming, balances well against its smoother meandering drones and ambient wash. The production on this album is very clear, allowing the full sonic range of all instruments to be heard and giving a sense of great depth and space in the music as it spreads out of the speakers and fills the room, and beyond. All seven tracks give the impression of continuous organic change culminating in the final piece “A Very Short Trip around a Supervoid” which turns out to be not so short, both in its actual length and in the way it penetrates and fills up all the space in your head and mind. Long after the album ends, deep down in your cells, this music is still expanding and evolving.