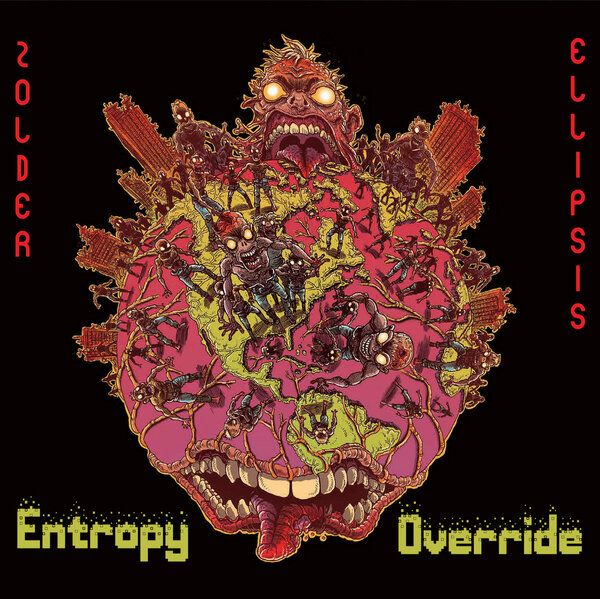 Initially released as Zolder Ellipsis by U.S. keyboardist/composer/producer Tom Aldrich, this prog nouveau instrumental workout began its life as a tip of the chapeau to Frank the Zee’s final meisterwerk Civilisation: Phaze III. Like Topsy, this conceptual project grew in unexpected/diverse ways, where other influences and impressions made their presence felt. A melange of melanges if you will, in which improv jazz gets into compromising positions with strands of deviant circuitry then combines forces with krautrock and the avant metal scene, Oh, and did I mention ancient Greek and Roman music too?

Almost as if one eye was on a stopwatch, Tom (see also collaborations with Bang on a Can and Mann & Weil (!)) began the Entropy remit by engaging the considerable chops of guitarist Sean Moran (also Bassoon and the 4 Bags), bassist Chad Langford (also Sixth Sense), synthesist Ivo Bol and drummer extraordinaire Theo Lanau. These guys then met up for the very first time during mid-2019 and with their asses clearly on fire, proceeded to record the whole album (at Wedgeview Studios, Woerdense Verlaat, Netherlands) in two days flat! Just one of those rare, charmed instances where everything group-wise just clicked into place.

Even though each bandmember is a composer in his own right, there’s no sign of anyone jostling for the alpha male position. I have heard a lot of contempo prog/filigreed metal and what have you on local radio’s specialist programmes, where that mode of thort is all too prevalent – woe to ye Anathema and your ilk !! Thankfully here, there’s not a banana skin in sight. Zolder seem to operate from a strident and, at times, breathtakingly complex standpoint. Dazzling heights of band interaction are scaled effortlessly, which can’t help but induce a form of light-headedness in the listener, (that’s a good thing by the way). In “Craig gets Reanimated”, the near funk arrangement sees some testy Frippesque dive-bombing which is neatly framed by a more dislocated version of a Herbie Hancock piece (circa Sextant). This makes way for a very brief “Zip Gun” blast and an even shorter “Q + A”, where its notation is broken down to an odd hyperactive squiggle. More manic activity breaks out on “Android Coronation Ball” and the epic “The Antidote Game”. Both finding Mr Bol’s feline purrs and squeaky latex sonics firmly in the school of the great keyboard-less synthesists in which Messrs DikMik, Ravenstine and Simply Saucer’s Ping Romany reign supreme.

And yes, the erm, concept does deal with “…different types of automation – symbolised by robots (artificial mechanisation) and zombies (reflexive obsession)…” and yes, James Stokoe’s sleeve art does portray said zombies running riot all over a very angry red planet – but… puh-leez don’t let the cartoony graphics detract from what is most certainly the definite article. Love this.