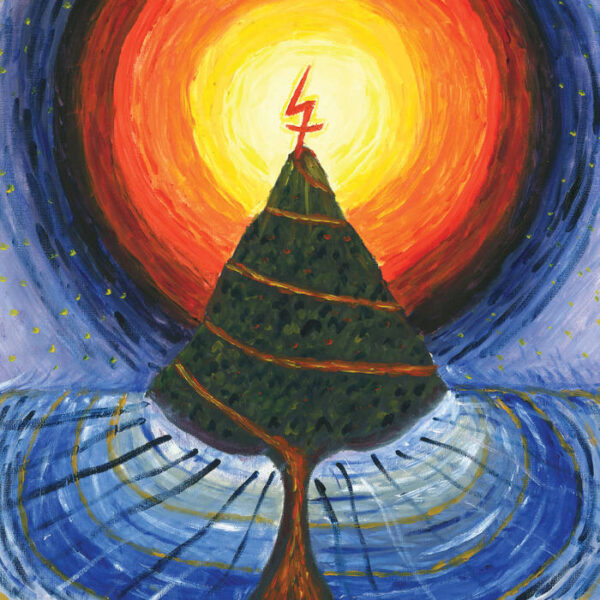 Coming a few months after Album No 20 “Aavikon Varjo” and – unbelievably! – at almost the same time as another new album “Thurisa”, this new release from Circle of Ouroborus is very much in the style of past album “Vimeinen juoksu” from 2020: a blackened post-punk work with a dark, dejected outlook, this time though with a cleaner sound and a discreet, cold keyboard ambience. The angry vocals are etched in reverb and together with fairly clean guitar tones and the keyboards give the recording a bleak and desolate urban blues air. Even CoO’s trademark unearthly voices, set in the far distance, have this desperate quality as melancholy and dejectedness on the edge of the abyss turn into rage.

Out there in a grey-black no-man’s-land where the landscape is one level black desert and even the skies are clear shades of dark grey, with no cloud to give them a bit of tonal contrast and interest, the musicians play nine songs of spiky guitar riffs, vocals filled with venom and steady percussion. Guitar tones have enough grit to sound tough but are otherwise bell-like and clear, and this clarity makes them stand out even more against the huge black spaces behind the music. While the songs are clearly structured like pop songs, with the lyrics and guitar riffs dominant in a minimal style of music, at the same time they are rather forbidding, even a bit sinister.

While the genre of these songs tends towards blackened post-punk, some tracks like “Näkemisen taito”, the title track and “Uusi polku” have a clear straight-out black metal orientation in their melodies, pace and structure. “Vaakalauta” leans towards mediaeval folk / dungeon synth in its initial melodies and at least one instrumental passage where guitars or keyboards appear to imitate bagpipes. Later songs from the title track onwards feature a slightly wider range of instruments (synths coming to the fore in the title piece) and Antti Klemi’s familiar high-pitched chanting, emotionally remote, distant and otherworldly, becomes a bit more prominent.

Compared to other recent full-length recordings, “Autuala” might disappoint those CoO fans expecting more variety and inspiration in genre, atmosphere and sonic texture. The songs don’t have their own clear musical identity but share in the same desolate mood and clean minimal presentation. Long-time CoO fans may find “Autuala” among the least quirky and individual of the duo’s albums. What I come away with after hearing “Autuala” is an impression of a depressive, almost suicidal dark urban blues soundscape: physically it might look busy and full but spiritually it is a complete vacuum. That may be the message we’re supposed to pick up from “Autuala”.