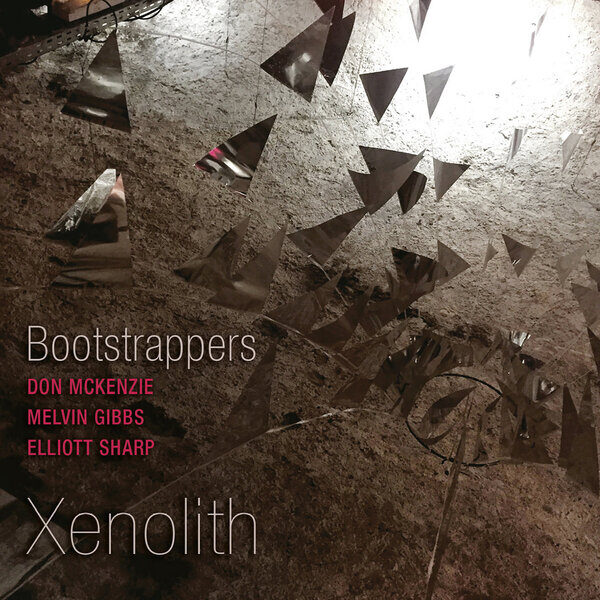 The Bootstrappers group was quite an interesting proposal in 1989, when guitarist Elliott Sharp joined forces with two of the Minutemen George Hurley and Mike Watt, and their self-titled LP appeared on New Alliance, a subsidiary of SST. Veteran avant-stringster Sharp was no stranger to that label of course, appearing there in the 1980s with his records with Soldier String Quartet and Carbon. I never heard that original Bootstrappers LP but am now intrigued enough to want to make a search…it seems the band continued to thrive in the 1990s, though with changing personnel, and Elliott Sharp recruited many other friends to join the project as he worked his way across California appearing at concerts and festivals.

Today’s record Xenolith (KLANGGALERIE GG390) contains nary a trace of the Minutemen / fIREHOSE connection, but does feature bassist Melvin Gibbs and drummer Don McKenzie alongside Sharp with his guitars and electronic effects, for these live 2021 sessions laid down in New York. Gibbs has appeared with major jazz-rock crossover acts such as Ronald Shannon Jackson and at least one incarnation of the Sonny Sharrock Band, indicating how the Bootstrappers aesthetic is able to lean in that direction and still remain with its sneakers planted in some form of angsty, No Wave-ish American guitar groink. As to McKenzie, he’s a sometime drummer with the “future blues” group Elliott Sharp’s Terraplane, active since 2000.

Xenolith often exhibits the qualities I would tend to associate with Sharp, namely that he likes to fill every available space with music, and each passing second is crammed with very busy noodling and elaborate fingering, often enhanced with twisty effects that further discombobulate the sound and produce a labyrinthine knot of exhausting music. Put simply, he’s a powerhouse of energy. In amongst all this frenetic action however, there are some impressive chops, embracing everything from jazz to free improvisation and funk, with progressive rock, psychedelic rock and more. Two suggested reference points, according to the press note, are late-period Hendrix and 1980s Ornette during his so-called “harmolodic” period, but I can also hear passages that would appeal to fans of the later versions of King Crimson.

Sharp is a prolific and hyper-intelligent, and while we have enjoyed some recent records demonstrating his fluency with complex modern composition, this is the record to check out if you want to hear his considerable and very fluent improvising skills, in the context of genre-hopping energy music. From 18 November 2021.